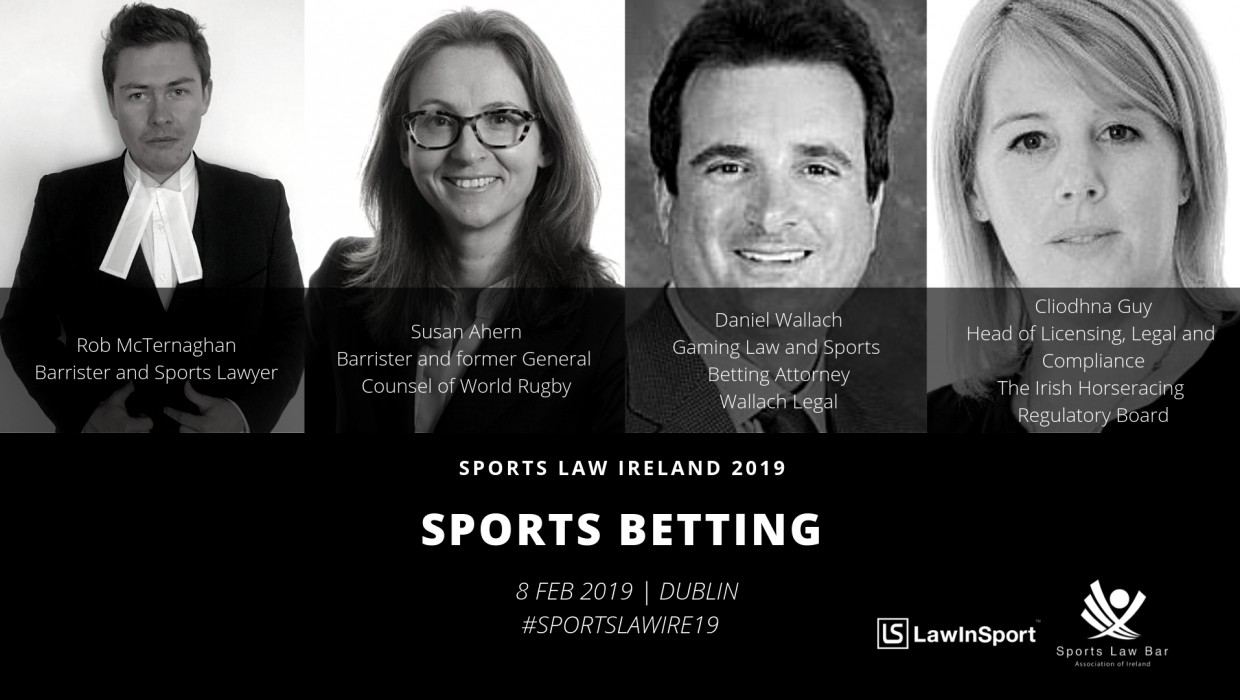 To discuss the changes to the sports betting industry and the impact of the Independent Tennis Integrity Report, we have brought together leading experts to debate the issue.

The speakers on the Sports Betting panel are:

Robert is barrister in private practice, he works in both jurisdictions on the island of Ireland. Robert has a broad general practice and specialises in sports law, he is also a board member of the European Young Bar Association, representing over 200,000 young lawyers in Europe.

Susan Ahern is a Barrister and Arbitrator. A Fellow of the Chartered Institute of Arbitrators she is a member of the Court of Arbitration for Sport and Sport Resolutions UK International Panel.  She is a member of the Legal Commission of the IAAF and was formerly Head of Legal and Regulatory Affairs for World Rugby during which time she was responsible for devising and implementing the Anti-Corruption & Betting Regulations and their supporting education and enforcement mechanisms. Susan has held non-executive roles with numerous national and international sports bodies and has been appointed as Lead Drafter on the review of the WADA International Standard for Testing and Investigations.

Daniel Wallach is Board Certified in Appellate Practice by The Florida Bar, and is AV-Rated (the highest level attainable) by Martindale-Hubbell. Mr. Wallach is a nationally recognized authority on gaming law and sports law, and has counseled professional sports teams, fantasy sports operators, casinos, racetracks, equipment manufacturers and suppliers, and other industry participants on a wide spectrum of gaming-related matters. He is one of the leading voices in the emerging area of sports gambling law, and, in particular, the laws and rules governing sports betting and fantasy sports.

Mr. Wallach is a member of the prestigious International Masters of Gaming Law (IMGL). The IMGL is an invitation-only organization for attorneys who have distinguished themselves through demonstrated performance and publishing in gaming law, significant gaming clientele and substantial participation in the gaming industry.

Mr. Wallach has been described as a “gaming law guru” by Michael McCann, the legal analyst for Sports Illustrated and SI.com, and is frequently quoted by GamblingCompliance on U.S. gaming law issues. He has written extensively about New Jersey’s efforts to legalize sports wagering, and his commentary on that subject has appeared in Sports Illustrated, ESPN.com, USA Today, the Newark Star-Ledger, The Bergen Record and the Asbury Park Press.

Mr. Wallach has also emerged as a frequent media commentator on sports law issues. He was quoted in several recent Sports Illustrated articles about the Donald Sterling controversy and the sexual assault allegations against Jameis Winston, and has been interviewed by radio stations and news outlets throughout North America on a wide variety of sports law issues, including the Sterling controversy, the FCC’s elimination of its sports blackout rules, the legal challenges to the federal ban on state-regulated sports wagering, the Steve Moore-Todd Bertuzzi civil lawsuit, and the NFL’s new domestic violence policy and how it impacts the status of Ray Rice and Adrian Peterson.

Mr. Wallach is also a highly sought-after speaker at gaming and sports industry conferences. He was a featured panelist at the 2015 Sports Lawyers Association Annual Conference, the 2015 Southern Gaming Summit, the International Masters of Gaming Law Spring 2015 Conference, and delivered the opening remarks at the ABA Annual Meeting program entitled “Game-Changer: The States’ Big Gamble on Legalized Sports Betting,” featuring former U.S. Solicitor General Theodore Olson and Sports Illustrated’s Michael McCann. Mr. Wallach organized and prepared all of the written materials for that program, which was selected by the ABA as a “premier showcase” program.

Mr. Wallach began his legal career as the judicial law clerk for the Honorable Jacob Mishler, a federal district court judge and the former chief judge of the United States District Court for the Eastern District of New York. Upon the conclusion of his one-year clerkship, Mr. Wallach joined the New York office of Weil, Gotshal & Manges, where he was a member of the Business and Securities Litigation Department (which, at the time, was the nation’s largest law firm practice group devoted exclusively to the practice of federal securities litigation). While there, Mr. Wallach worked on a wide range of cases arising under the federal securities laws, including class action and derivative action lawsuits filed against issuers and underwriters of securities, and authored or co-authored several articles.

Cliodhna Guy, Head of Licensing, Legal and Compliance at, The Irish Horseracing Regulatory Board

Cliodhna Guy joined the The Irish Horseracing Regulatory Board in mid-February 2017. Cliodhna is an Irish qualified lawyer who has focused her career path in the sports industry. She qualified as a solicitor in Byrne Wallace, one of Ireland's top commercial firms and went on to gain significant experience, both nationally and internationally, as Legal Manager in the Football Association of Ireland and subsequently as Legal Director for the International Boxing Association. She has a Masters in Sports Law from De Montfort University in Leicester. She has strong international connections in the sports law industry and joins the The Irish Horseracing Regulatory Board with an in-depth knowledge of integrity, disciplinary and governance matters.