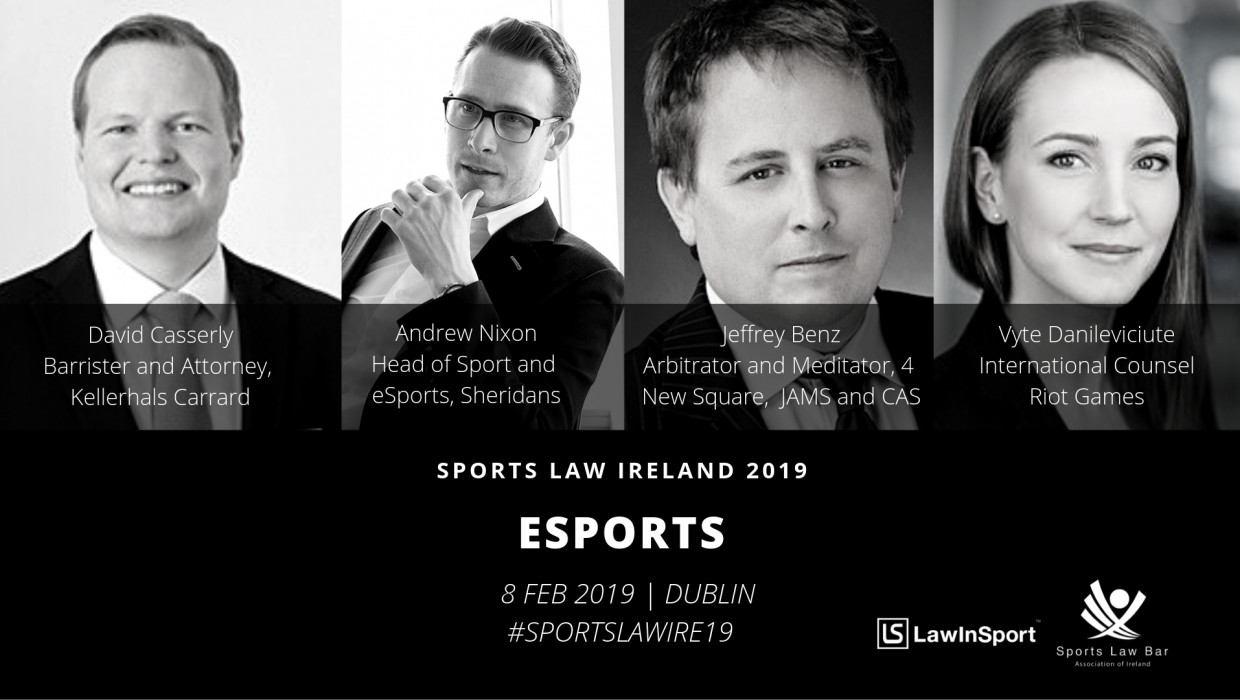 To discuss whether the eSports industry has finally matured, we have brought together leading experts to debate the issue.

The speakers on the eSports panel are:

The conference will also offer unrivalled networking opportunity with the leading experts, lawyers and executives in the sports sector as well as 4 interactive panel discussions.

David Casserly is a barrister and attorney (Bar of Ireland; Bar of England & Wales; Bar of New York) specialised in the areas of sports law and international arbitration.

Mr Casserly acts for a wide range of clients, including prominent football clubs (English Premier League, La Liga, Serie A, Ligue 1, Chinese Super League, Brasileirão etc.) and some of the world's largest sporting organisations. He is particularly recognised for his expertise as an advocate before the Court of Arbitration for Sport and his experience and knowledge of the football industry.

Vyte is a legal counsel supporting Riot Games’ European operations and is currently based in Dublin, Ireland. Since joining Riot in 2015 Vyte took interest in esports as an exciting and dynamic space. She advises the esports team on matters relating to league operations, events, production, broadcast, sponsorships, media and publishing. Her primary focus areas at the moment are the roll out of the Long Term Partnership system in 2019, evolution of the semi-professional leagues, and business development efforts. Before joining Riot Vyte spent several years with a law firm SORAINEN in Lithuania starting as a junior lawyer before moving on to head the firm’s Communications, Media and Technology Sector Group. Vyte has also worked as an independent legal advisor for technology start-ups, film and creative industries in the Baltics region.

He is  regularly called upon as an expert in sports law by media outlets such as BBC, Sky News, Sky Sports News, Channel 4 and ITV and is an accomplished sports conference speaker. Andrew is also Non Executive Director of the English Table Tennis Association.

Jeffery Benz, Arbitrator and Meditator, 4 New Square, JAMS and the Court of Arbitration for Sport

Born in the US, he earned his undergraduate and MBA degrees at the University of Michigan and his law degree at the University of Texas, and is admitted as a member of the bar of the states of California, Colorado, Hawaii, and New York, and a variety of United States federal courts. Jeff also attended a semester at the Queen Mary University of London and the Institute of Advanced Legal Studies and started his professional career as an intern in Lloyd’s Claims Office in London.

Jeff’s UK, and European, practice is devoted primarily to acting as mediator and arbitrator. Jeff has strong background in the law governing disputes and transactions in entertainment, sports, technology, and insurance, and he has been involved in general commercial practice his entire career. He is a CEDR-accredited mediator and a Fellow of the Chartered Institute of Arbitrators, and he is a principal mediator and arbitrator with the Agency for Dispute Resolution in Los Angeles. His work as an intermediary or counsel has taken him around the world, throughout the United States, and to, among other places, Australia, China, Hong Kong, Japan, Switzerland, Moldova, Georgia, Thailand, Kenya, Mexico, and, of course, the United Kingdom.

Jeff is an adjunct professor at the law schools at Los Angeles-based Pepperdine University and Madrid-based ISDE, and he contributes regularly to the literature on dispute resolution and sports law. Since 2013, Jeff has been named as one of a handful of worldwide professionals in the Who’s Who of Entertainment and Sports Law, where he is one of the few neutrals so recognized in the field.