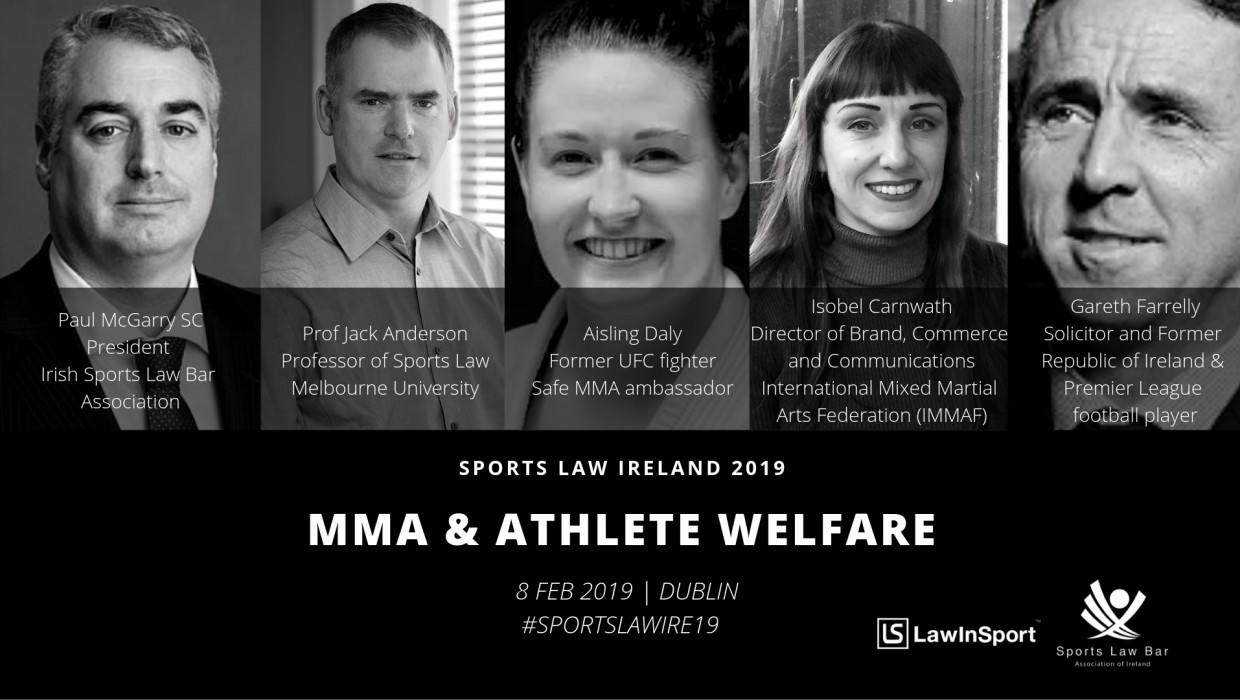 To discuss the regulation of Mixed Martial Arts and athlete welfare, we have brought together leading experts to debate the issue.

The speakers on the MMA and athlete welfare panel are:

Paul McGarry SC was Chairman of the Bar of Ireland from July 2016 to July 2018. Called to the Bar in 1996 and appointed a Senior Counsel in 2010, he is also a member of the Bar of England and Wales since 2012. He obtained a BCL from University College Dublin in 1991 and an LLM in EU Law in 1992. His practice is primarily in public, commercial and European law.  He is an accredited mediator and international arbitrator.
He has served on many bodies and authorities, including the Judicial Appointments Advisory Board, Courts Service Board, Euro Changeover Board, the Board of Irish Rail and the International Council for Advocates and Barristers.

He is currently head of the Irish delegation to the Council of European Bars and Law Societies (2014-16 and 2018-2020). He is also co-chair of the IBA Forum for Advocates and Barristers (2018-2020), and chairman of both the EU Bar Association and the Sports Law Bar Association of Ireland.

He is a bencher of both Kings Inns and Middle Temple.

Jack Anderson is Professor and Director of Sports Law Studies at the University of Melbourne. He has published widely in the area of sports law including The Legality of Boxing (2007),Textbook on Sports Law (2010), Leading Cases in Sports Law (2013) and EU Sports Law (2017). He is a Chartered Arbitrator and, having previously been an arbitrator with the GAA, FAI and Just Sport Ireland, he is currently a mediator/arbitrator for Sports Resolutions UK and the Court of Arbitration for Sport.

He supports Doon, Limerick, Munster, Ireland and Watford FC and, yes, he looks like Paul Scholes.

Isobel (Izzy) Carnwath has worked in public relations for MMA since 2010, initially representing professional promoters and competitors, with BAMMA as a main client.

She was part of the founding team in 2011 -12 of SAFE MMA, a non-profit and volunteer led medical project dedicated to the safety of MMA fighters. She has volunteered within its administrative management since that time, becoming a trustee on its registration as a charity in December 2018.

Isobel first joined new international sports governing body, IMMAF, in 2013 - 2014, and worked as part of the organising team for the first IMMAF World Championships of Amateur MMA in Las Vegas. She assumed a full time role within IMMAF in 2015 as Marketing and Communications Director.

He has accrued a wealth of experience in a wide range of white-collar crime matters, including SFO investigations and corporate compliance. The fusion of this specialist grounding and Gareth’s contact base has meant that he has developed niche expertise in complex high value tax fraud litigation and associated negligence actions as well as claims for restitution from mis-sold financial products.

He has also developed significant expertise in sports law, building on his extensive practical experience in the sporting industry.

He has been involved in numerous transfers and disputes concerning current and former players, including a leading Court of Arbitration for Sport case which resulted in changes being made to the rules. In addition, he is a member of the Football Association’s Judicial Panel and sits on both the Chairman’s Panel and the Football Panel. He is a member of Sports Resolutions’ independent Panel of Arbitrators and Mediators.

Aisling is Ireland's first ever professional female mixed martial arts competitor beginning her career in 2007. She then went on to win Ireland's first ever world title in MMA in the US in 2011 beating current UFC stand out Jessica Eye in the 2nd round via rear naked choke. Aisling competed internationally in a number of major MMA promotions including European front runner Cage Warriors fighting championship, the all female promotion Invicta Fighting Championship and Ultimate Fighting Championship rival Bellator MMA. Aisling began her career in MMA's premier promotion the UFC in 2014 having taken part in The Ultimate Fighter reality TV show. Aisling's career ended prematurely in 2017 due to minor brain injury. Aisling had amassed a record of 16 wins and 6 losses. Aisling is now a personal trainer and black belt Brazilian Jiu Jitsu coach.