What is the future for India’s football market?

In this series of feature blogs, the Sports Business Group at Deloitte offer financial commentary on some key activities in the global football industry. The second blog looks at the growth of football in India, and the potential of the market.

India is a country with a population in excess of 1.2 billion, and a football team that currently rank 167th in the world – just behind the Cook Islands. Such statistics are on occasion used to make the case that India is ‘not a football country’.

Cricket is India’s biggest sport, and India cricket’s biggest market. By definition, this makes the Indian Premier League (IPL), an eight team Twenty20 cricket tournament launched to much fanfare in 2008, a unique proposition. In terms of its profile, its commercial scale and the stature of the players it attracts it is unquestionably the world’s biggest annual cricket competition.

The IPL’s dominance has not stopped competitions of a comparable format being introduced in other sports, and nor should it. Whilst it is a vanishingly remote possibility that another sport could match or overhaul cricket’s supremacy in India in any foreseeable future, such is the scale of the market that being in second place could nevertheless prove very valuable.

One such competition, The Indian Super League (ISL), was launched in 2014.1 From October, when the tournament kicked-off in front of a stadium packed with 65,000 fans, to December eight teams played a round robin tournament before the top four progressed into semi-finals. Atlético de Kolkata were crowned champions with a 1-0 win over Kerala Blasters in the final in Mumbai.

The competition is a venture between IMG, Reliance and Star. The involvement of Bollywood stars and cricketing icons in the ownership and management of franchises served to mitigate any risk that football was not culturally significant enough to capture the imaginations of the Indian population. Names such as Sachin Tendulkar, MS Dhoni and Ranbir Kapoor coupled with those of Alessandro Del Piero, David Trezeguet and Elano provided sufficient stardust to ensure the competition got the coverage it required.

As was the case for IPL, the inaugural season exceeded expectations. Total attendances reached almost 1.6m, at an average per match of 26,030. The tournament, which was broadcast in five different languages in India, was reportedly watched by 426m individual viewers. 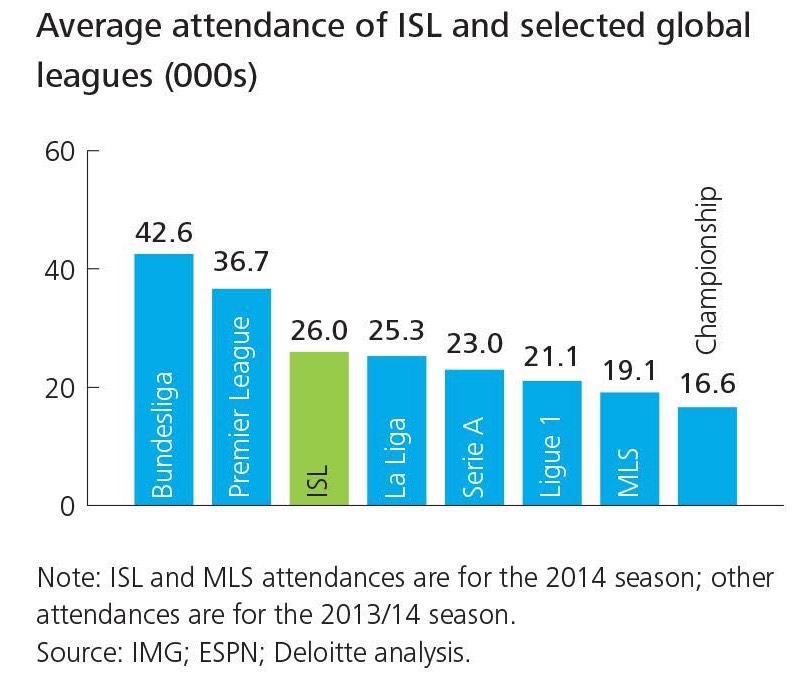 Senior Consultant, Sports Business Group at Deloitte
The Sports Business Group at Deloitte is a team of 20 people based in Manchester, working exclusively on sports business projects with clients in the UK and around the world.  Adam has assisted UEFA with the development of their Club Licensing and Financial Fair Play regulations for clubs across Europe.