In this series of feature blogs, the Sports Business Group at Deloitte offers financial commentary on key activities in the global football industry. The fifth blog looks at the value of the Europa League to Premier League football clubs.

The UEFA Europa League (formerly UEFA Cup) has had winners from seven countries in the last 15 years, with Spanish clubs performing particularly well. In contrast, Premier League clubs have arguably underperformed and the competition’s value to Premier League clubs is the subject of much debate. So what are the on and off-pitch facts?

A common accusation levelled against the competition is that the volume of games, frequently involving significant travel, places an undue strain on playing squads and disrupts the rhythm of a club’s season caused by the Thursday timing of matches (usually leading to league games on a Sunday), which combine to hinder league performance.

The chart below examines this by considering the change in league performance for clubs from the ‘big five’ leagues playing the Europa League for the five completed seasons since 2009/10. 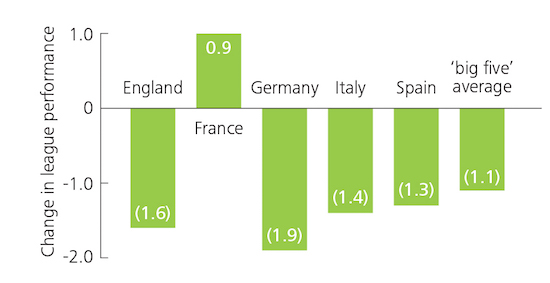 The data suggest that while, on average, there may be a negative impact of playing in the Europa League, this impact is modest, just over one place. English clubs fare worse but it is still only 1.6 places. Of the 68 clubs examined, 36 clubs experienced a fall in league position in the season playing in the competition, but 32 clubs performed the same or better (eight and five respectively for the 13 English clubs). It seems evident Europa League participation does not necessarily result in poor league performance.

Alan Switzer is a Director in the Sports Business Group with over twelve years’ experience in the sports business industry. He has worked with a wide variety of governing bodies, clubs and other organisations from a broad range of sports. Alan leads the Sports Business Group's horseracing and equestrianism assignments and has worked with many of Racing's key organisations.