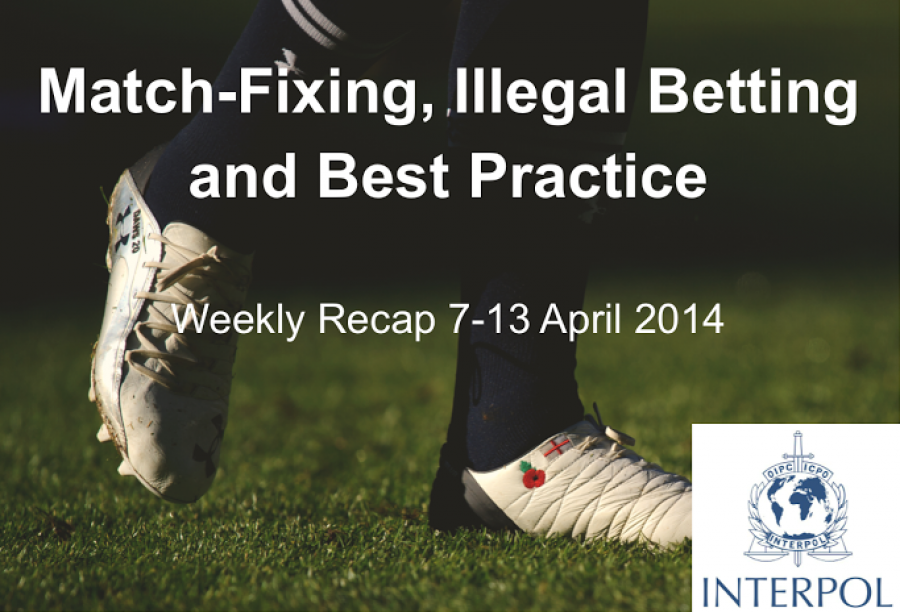 Last week we were in West Africa where we hosted two INTERPOL-FIFA Regional Integrity Workshops in Senegal and Cote d’Ivoire for the member countries of the West African Football Union (WAFU), zones A and B. Our many thanks to our partners at WAFU A and B and all of the delegates for contributing to two successful events.

The completion of these workshops marks a significant milestone in the INTERPOL-FIFA initiative as we enter the next phase of our 10-year partnership. Our initiative began in May 2011 with the goal to educate and train key actors on how to recognize, resist and report attempts to corrupt or fix matches and we set out to do this on a global scale. To date, we have trained nearly 2000 participants from football, law enforcement, government, the gaming sector, and key stakeholders in the sporting community from 193 countries across 6 continents. While our workshops, conferences and training seminars have taken us all across the globe to raise awareness of the dangers of match-fixing, we recognize that our work is far from over.

The next phase of the INTERPOL-FIFA initiative will see the launch of several innovative resources, tools and services as part of a holistic strategy we have developed to enable stakeholders to actively prevent and respond to match fixing at the National, Regional and Global Level.

We want to empower representatives of the football community to deliver training to ALL of their members to Recognize, Resist and Report match-fixing.

We want to enhance the unique investigative skills necessary for law enforcement investigators and fact finders from sports organizations to disrupt and investigate match-fixing operations.

We want to provide countries with a platform to develop multi-stakeholder prevention initiatives that work through partnerships and cooperation.

And we want to do much, much more.

In addition to the recap, please find attached a brochure outlining our strategy and the tools and services we can offer you. This information can also be found (in all INTERPOL and FIFA languages) on our website: https://www.interpol.int/Crime-areas/Integrity-in-Sport/Integrity-in-sport

As part of our mandate to raise awareness of contemporary issues related to match-fixing in football, the INTERPOL Integrity in Sport unit compiles an overview of the main stories in the media related to current investigations, sanctions and sentences, illegal betting and best practice.

Below is our recap for the week. We look forward to providing you with these reports on a weekly basis and please feel free to share this information with members of your organization.

If you have any questions, comments or no longer wish to receive these recaps, please do not hesitate to contact us.

(...) Match fixing has plagued – to various degrees – every sports industry since its inception. However, a growing betting industry, estimated to be somewhere between $500 billion and $1 trillion annually, that includes both legal and illegal markets is increasingly casting doubts over the integrity of games. Increased ease of access to betting markets since online sports gambling ballooned nearly a decade ago in line with the growth of the Internet and mobile technology is facilitating match fixing in low-profile games around the globe and Lebanon is no exception, experts told The Daily Star. Imad Nahas, a lawyer who holds a doctorate in gaming contracts and betting from French law school Paris II Panthéon-Assas said some strong indications pointed to a series of manipulations in the results of several low-tier leagues across a number of different sports. “Several recent results in low-tier leagues including basketball and volleyball among other sports have made no sense to club owners and officials, who are inclined to believe that some players are manipulating the outcome of games,” said Nahas, who is also the secretary-general of the Lebanese Fencing Federation.

Alleged match-fixer Eric Ding Si Yang chose not to testify in his own defence in his long-running corruption trial, which resumed yesterday for the 23rd day. According to The Straits Times, this was despite District Judge Toh Yung Cheong's finding last month that the prosecution had established a prima facie case - that is, there was enough evidence to proceed with the trial. Given Ding's silence, the court may draw an adverse inference against the 32-year-old former freelance football tipster with The New Paper (TNP). He is accused of bribing three Lebanese match officials by offering them sex with prostitutes in return for fixing an undetermined future match. Referee Ali Sabbagh, 34, and linesmen Abdallah Taleb, 38, and Ali Eid, 34, were in Singapore last April to officiate an Asian Football Confederation game. They have since been deported after serving time here for accepting
bribes. Parties squabbled over the defence witness list yesterday as the trial resumed.

Source: “Match-fixing trial: Accused will not testify in own defence,” The Courtroom, 8 April 2014 https://thecourtroom.stomp.com.sg/courtroom/cases/case-of-the-day/match-fixing-trial-accused-will-not-testify-in- own-defence

The verdict on the case of alleged football match-fixer Eric Ding will be delivered on July 1. Ding is accused of providing prostitutes for three Lebanese match officials in return for fixing a match in Singapore in April 2013. The defence closed its case on Thursday. At the start of the defence's case on Thursday, lawyer Hamidul Haq said the prosecution had failed to prove the existence of any corrupt element and corrupt intent. He said the prosecution also failed to secure the attendance of the two linesmen Abdallah Taleb and Ali Eid. It relied only on their statements to the Corrupt Practices Investigation Bureau. Mr Haq said that after the two linesmen returned to Lebanon, they claimed that they had pleaded guilty so that they could return home as quickly as possible. The defence also raised points made by prosecution witnesses during cross-examination that Ding had been preparing to write a book on football match-fixing. The defence's only witness Jegathesan K Rajagopal, who was a sports editor at The New Paper, testified that he was not aware of this. If convicted, Ding can be jailed up to five years and fined $100,000 on each of his three charges.