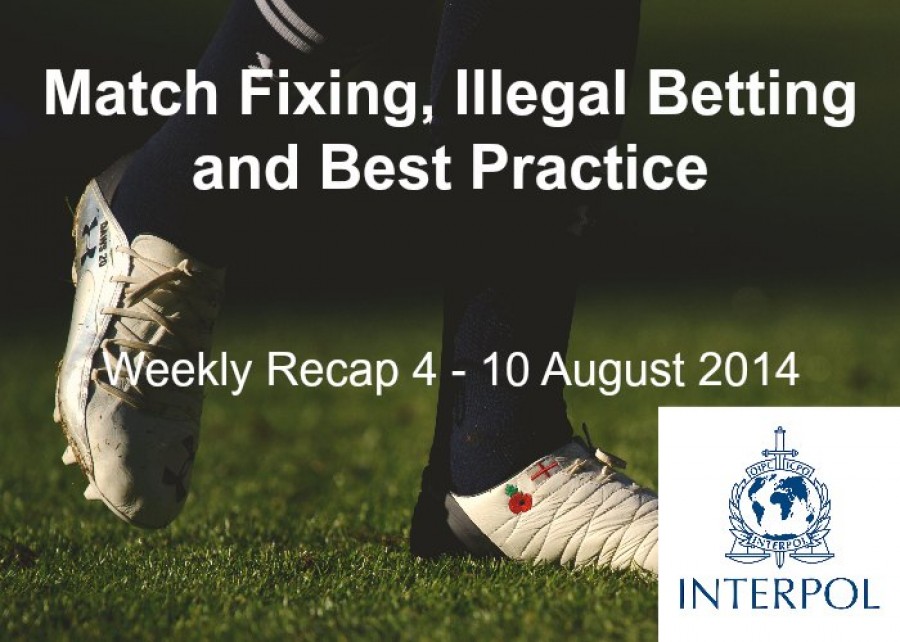 Tuesday, 12 August 2014
Match-fixers have been innovative this past week by creating a ‘phantom’ football match between Spanish club Ponferradina and Portuguese club Freamunde which never took place. This fraudulent game manipulated those who placed bets and is being looked into by European and World football governing bodies as well as police.
Two good practice articles emanated this week from the United Kingdom. Firstly, the FA has produced a series of educational material on the dangers of match-fixing, betting and inside information. In line with their new rules, this material will be disseminated to all role-players within football. The material also features Simone Farina, FIFA Ambassador for Fair Play on his personal experience in recognising, resisting and reporting match-fixing. Secondly, the Gambling Commission and Crimestoppers have joined forces to combat match-fixing, which provides a good example of collaboration between law enforcement and other appropriate agencies.

Five former players and five other suspects are set to appear in a criminal court on Friday at the start of a 10-day trial for their alleged involvement in a match-fixing scandal that rocked Austrian football last year. The 10 defendants, including retired international Sanel Kuljic, have been charged with manipulation of 18 domestic league games in Austria's first and second divisions between 2004 and October last year. Criminal prosecutors say 15 more men are still under investigation, while charges against 18 others were dropped due to a lack of evidence.
Source: "Match-fixing trial to start in Austrian court", 8 August 2014, Associated Press, https://www.usatoday.com/story/sports/soccer/2014/08/08/match-fixing-trial-to-start-in-austrian-court/13763635/

The management of Kano Pillars have disclaimed the document which purportedly implicates the club in a match-fixing scandal, and has threatened to take legal action against the makers of the document. The document which was released by Today.ng an online news portal contains the minutes of a meeting whose primary agenda was to influence the outcome of away matches by offering financial considerations to match officials. The management of Kano Pillars has however vehemently disclaimed the document, describing it as a baseless attempt by saboteurs and enemies of the club to bring the reigning Glo Premier champions to disrepute. Speaking with KickOffNigeria.com, Media Officer of Kano Pillars, Idris Malikawa, denied that the document originated from the club, insisting that the club will take judicial action against those responsible.
Source: Uche George Egbe, "Pillars disclaim document, deny match-fixing", 10 August 2014, KickOffNigeria.com, https://www.kickoffnigeria.com/news/47612/kano-pillars-deny-match-fixing-claims

Spain's professional league (LFP) has identified a suspected betting fraud involving a "phantom" match between Spanish side Ponferradina and Portuguese club Freamunde which never took place. The friendly between the two lower league teams was supposed to have been played on Monday at 1000 local time (0800 GMT) despite the fact that Freamunde played a Portuguese League Cup match the previous evening, the LFP said. "The LFP's integrity unit contacted Ponferradina officials who confirmed that the supposed match never took place and that, therefore, it was a fraudulent manipulation of those who placed bets and the sports betting firms," the LFP said. The LFP, which has sought to show it is taking a tough stance against match-fixing, will be informing soccer's European and world governing bodies, UEFA and FIFA, and the police of the apparent fraud.
Source: Iain Rogers, "Spanish league denounces fraudulent 'phantom' match", 5 August 2014, Reuters, https://in.reuters.com/article/2014/08/05/soccer-spain-matchfixing-idINL6N0QB5RZ20140805