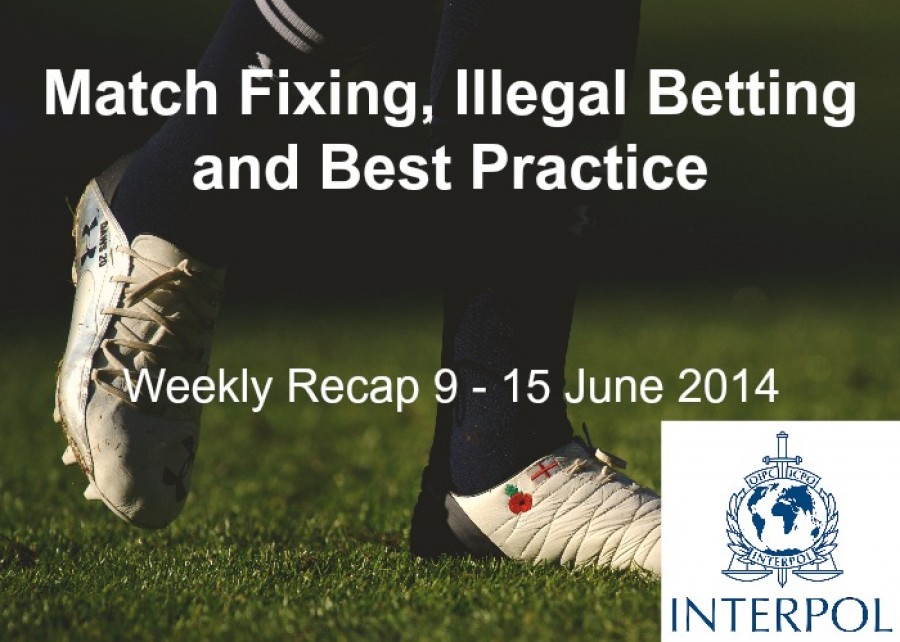 Jurors in the trial of three non-league footballers and two other men, including one from Hastings, accused of involvement in a match-fixing conspiracy have been sent home.
Businessmen Chann Sankaran and Krishna Ganeshan are alleged to have acted together with footballers Hakeem Adelakun, Moses Swaibu and Michael Boateng to commit bribery. During a four-week trial at Birmingham Crown Court, Boateng, Adelakun and Swaibu were described by the prosecution as "willing recruits" in efforts to influence the course of lower league matches. Sankaran and Ganeshan, who had travelled to the UK from Singapore, both deny the same charge. The jury initially retired on Wednesday afternoon but has yet to reach verdicts on any of the defendants.

The CONCACAF congress last week included on its agenda the first report of its newly created Sports Integrity Department, delivered by Dr Laila Mintas. Her report included results on investigated cases and the announcement of a whistleblower hotline for fans, players, coaches and executives. The importance of the unit was underlined by CONCACAF president who could have been speaking about his key role in FIFA's anti-discrimination task force in his remarks. CONCACAF has taken a lead amongst confederations with its approach to match-fixing – though they brand it under a wider 'Integrity' banner. Created last November with Mintas brought in from FIFA's Early Warning System to head it up, the Sports Integrity Department has created the confederation's action plan starting with a strategy of prevention through education and creating "efficient regulations against match fixing, investigation and sanctioning match fixing cases with zero tolerance," says Mintas. Two of the newer measures that have now come to fruition are the establishment of a confidential whistleblower system and the 'single point of contact' initiative.

The Sports Committee of El Salvador's Legislative Assembly proposed creating a new special committee responsible for investigating match-fixing cases and allegations. The committee also decided to start a new investigation on match-fixing and cited former footballers, FESFUT’s Executive Committee and General Prosecutor Luis Martinez. The agreements were reached after hearing the technical and legal defense statements of lawyer Nelson García, the defense counsel of Alfredo Pacheco, Ramón Flores and Osael Romero, three of the 15 players banned for life by FESFUT due to their links with match-fixing.

FIFA has urged member associations to designate one individual to be responsible for all matters related to manipulation, as world football's governing body looks to step up the battle against match-fixing. In the run-up to this week's Congress, FIFA has distributed a 23-page booklet of guidelines to member associations entitled, 'Specific Recommendations to Combat Match Manipulation'. In a covering letter, Jérôme Valcke, FIFA's Secretary General, said: "Match-fixing is a known problem in international sport. Where football is concerned, legal proceedings around the world have provided evidence that it is a global concern that can no longer be ignored." He went on: "At the 63rd FIFA Congress in May 2013, FIFA member association delegates were presented with a thorough report on FIFA's ongoing fight against the scourge of match manipulation and were called upon to implement their own national integrity initiatives with FIFA's guidance and support... "Match manipulation has no place in football. For prevention to be effective, the football community must collaborate in a concerted and cohesive manner by enhancing the exchange of information and best practices, overcoming loopholes in existing legislation, improving legal and judicial cooperation, ensuring that administrative systems with effective and appropriate legal means are established and creating preventive measures and relevant training programmes."

The Japan Sport Council (JSC) today held an “integrity of sport” Symposium in Tokyo in order to promote awareness of various threats to the integrity of sport supported by the Fédération Internationale de Football Association (FIFA). Recently the JSC has launched its Sport Integrity Unit, which acts in the areas of fight against doping, harassment and match manipulation in sport, and promotion of good governance among sport organizations in Japan. The JSC will work in cooperation with the FIFA for protecting the integrity of sport. As the first action of the JSC-FIFA agreement, the symposium, attended by around 350 people including sports officials, lawyers, business people, academics and students, took place in order to spread the awareness of potential and existing threats toward sport such as violence, racism, harassment, doping, match fixing, lack of governance and corruption. FIFA also provided a video message from Mr. Ralf Mutschke, FIFA Security Director, who introduced the FIFA Integrity Initiative, a holistic and multi-disciplinary approach to fight against match manipulation in football.

Source: "Japan Sport Council promotes awareness of various threats to the integrity of sport", 9 June 2014, Around The Rings https://www.aroundtherings.com/site/A__47321/Title__Japan-Sport-Council-promotes-awareness-of-various-threats-to-the-integrity-of-sport/292/Articles