Match-Fixing Update: illegal betting raids across Asia, but FIFA reports no evidence as yet of match-fixing at World Cup Brazil 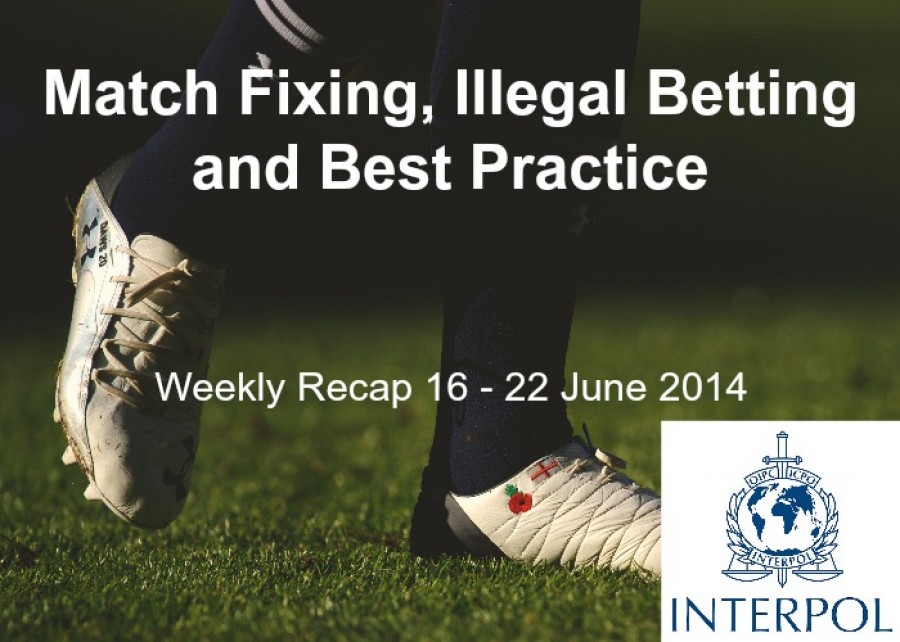 Two businessmen and a footballer convicted of plotting to fix the results of football matches have been jailed. A National Crime Agency (NCA) investigation began when the Daily Telegraph presented the agency with evidence from an undercover investigation.
National Crime Agency branch commander Richard Warner said the businessmen had tried to build "a network of corrupt players in the UK". He said the NCA was continuing to work with the Gambling Commission and the Football Association and its investigation continued. The jury was discharged from reaching a verdict on footballer Moses Swaibu. Mr Swaibu, 25, of Tooley Street, Bermondsey, south London, had denied a single count of conspiracy to offer, promise or give a financial advantage.

Stay clear of illegal betting syndicates, the Jockey Club warns in a series of television ads that began yesterday. The five one-minute ads are aimed at what the club calls responsible gambling while warning the public about the risks associated with credit betting and illegal gambling. The club's Betting and Lotteries Commission chairman, Samuel Yung Wing-ki, said a multi-pronged approach must be taken to combat illegal gambling. The modes of operation of illegal gambling have undergone drastic changes in recent years, according to a club spokesman. With rapid advancements in information technology, most illegal bookmakers have switched their operations online, which makes detection increasingly difficult.

Business has been in full swing for bookmakers cashing in on the FIFA World Cup around Phnom Penh this week despite police officials claiming they were planning to put a stop to any illegal gambling prior to the competition. Betting slips were being filled out in the open at a crowded cafe on the corner of Street 63 and Street 282 on Monday evening, while a bag full of slips was hanging at the front of the "344" electronics shop on Monivong Boulevard with a bookmaker sitting nearby. Despite the apparent apathy of the authorities toward the flouting of anti-gambling laws, 13 people were arrested during a raid on an Internet cafe on Monday and three others were detained in a separate bust in Svay Rieng City on the same day.

Macau police have busted a bookmaking racket that allegedly took HK$5 billion ($645 million) in illegal bets - including a single HK$40 million bet - on World Cup football matches in a week, the South China Morning Post reported on Saturday. Police have arrested 22 suspects from what they say is the biggest illicit soccer-betting ring uncovered in the gambling haven following a raid of a hotel on Thursday, the newspaper said. Authorities in Macau, the world's largest casino market, Hong Kong and the neighbouring province of Guangdong have been collaborating to crack down on illegal soccer betting in southern China since the World Cup kicked off in Brazil last week. Hong Kong police have set up a task force with Macau and Guangdong authorities and are also working with Interpol across eight Asian countries to fight illegal betting during the World Cup, it said.

Raids by the Malaysian police have led to the arrest of 31 people for alleged involvement in illegal betting on the FIFA World Cup. Police also seized 61,215 ringgit ($19,000) and 5,650 Singapore dollars ($4,500), believed to be bets, from the suspects during the raids in several areas in the southern state of Johor, authorities said Friday, reports Xinhua. Police said similar operations against illegal gambling activities would continue for the duration of the World Cup.

Police have arrested 15 people in an island-wide swoop on illegal soccer betting. The 14 men and one woman, aged between 23 and 70, were picked up from various locations on Saturday. They are suspected to have received illegal bets for about $800,000 in the past two weeks, a police news release said. Officers from the Criminal Investigation Department and the Police Intelligence Department carried out multiple raids in the operation. Under the Betting Act, anyone convicted of placing bets with a bookmaker can be fined up to $5,000 and jailed up to six months.

Ho Chi Minh City police have arrested 23 people involved in betting on a World Cup match during a raid at a café at Le Hong Phong Apartments on June 14. Police said the café owner, Phan Van Ngoc Anh, masterminded the illegal betting services, Tuoi Tre newspaper reported. On June 14, dozens of police officers raided the café at 3:20am when a game between Spain and the Netherlands was midway through the second half. Betting on football is illegal in Vietnam. Police seized VND30 million (US$1,414) in cash, two laptops and many notes on the bets. The duo confessed they opened the café six months ago to supply football betting services. In Vietnam, people caught gambling for the first time are subjected to an administrative fine from VND1-2 million. However, repeat violations carry a jail term of up to seven years in addition to fines of up to VND30 million. Meanwhile, the crime of organizing gambling is punishable by jail terms of up to ten years, fines of up to VND100 million and seizure of all property.

When the FIFA World Cup 2014 opened, illegal betting has mushroomed. Coffee shops and foreign betting websites are the "business centers" for gamblers. Vietnamese police have sent warnings to big betting websites in Asia and the world that they would detect and punish online betting of Vietnamese citizens. However, Vietnamese gamblers are not afraid of such threats. They publically placed bets even before the opening of the World Cup 2014. These websites are run by leading and most prestigious "bankers" in Asia. Websites launched promotions for Vietnamese gamblers during the World Cup. These websites' chat rooms operate 24/7 and all questions are answered immediately in Vietnamese. Phan Thanh Tuan, a famous gambler in District 10, said that it is very safe to bet online because it is very difficult for the police to find evidence. Tuan added that with online betting, gamblers don't have to worry about bilking or paying commission in case of winning bets.