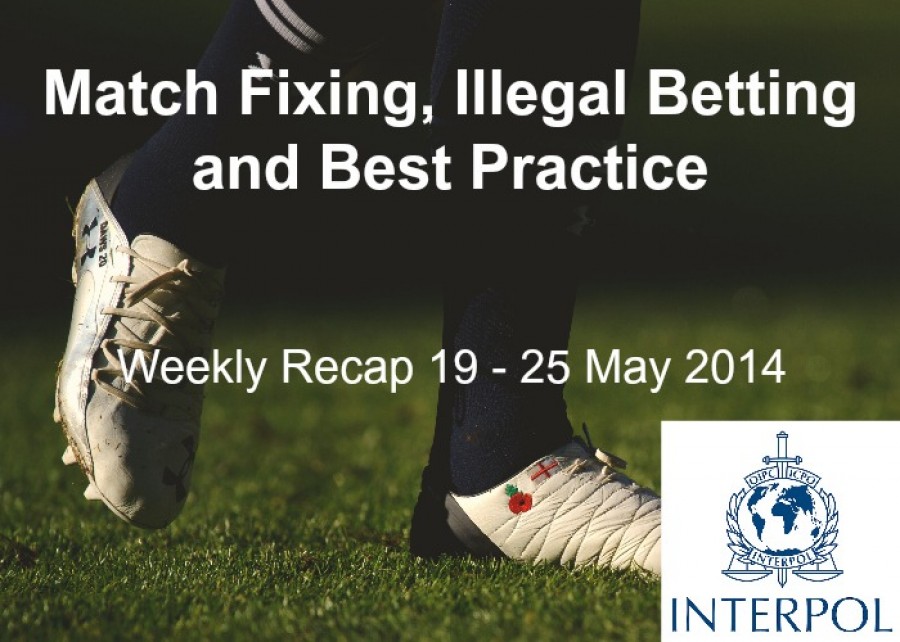 Singapore police said they have arrested 18 people believed to be part of a multi-million dollar illegal football betting ring less than a month before the World Cup starts.

"Preliminary investigations revealed that the suspects are believed to have received illegal soccer bets amounting to an estimated Sg$8 million ($6.4 million) in the past two weeks alone," the force said in a statement released on its website late Monday. It did not reveal the nationalities of the suspects, 16 women and two men, who were detained during raids on Sunday and Monday. Cash totalling Sg$1.4 million as well as computers, mobile phones, and documents detailing betting and bank transaction records were seized during the raid, police said. "Bookmakers and bettors who assume that they can hide behind the anonymity of the Internet to commit criminal offences should think twice," deputy assistant commissioner of police Kenny Tan warned in the statement. "The police will find them and prosecute both bookmakers and bettors alike to the fullest extent of the law." If convicted, the suspects face fines of between Sg$20,000 and Sg$200,000 and up to five years in jail. Sports betting is deeply entrenched in wealthy Singapore, with top European league matches the most favoured among punters. The Singapore Totalisator Board, which manages the country's two legal football betting and lottery companies, saw revenues of $983.3 million in the year to March 2013, from a total population of just 5.4 million. Experts say there are dozens of illegal football betting outfits in the city-state. Last year, Singapore police nabbed fourteen people believed to be members of a global match-fixing syndicate, including the suspected mastermind Dan Tan. In June last year, three Lebanese referees were convicted by a Singapore court of accepting sexual services in return for fixing future games. Singaporean businessman Eric Ding, who is accused of offering the bribes, is currently on trial.

Source: "Singapore swoops on illegal betting ring ahead of World Cup", 20 May 2014, The Times of India

The trial of five men charged with perpetrating English football’s biggest match-fixing scandal for decades is scheduled to begin on Monday. Three former players are among those on trial following a Telegraph Online investigation in November last year and a subsequent National Crime Agency investigation. Michael Boateng, Hakeem Adelakun and Moses Swaibu are accused of bribery, alongside Chann Sankaran and Krishna Sanjey Ganeshan. Boateng, Adelakun and Swaibu all face one count of bribery and another of plotting to commit the same offence, while Sankaran and Ganeshan are charged with three counts of bribery and one of conspiracy to commit bribery. It is alleged Ganeshan and Sankaran, both originally from Singapore, conspired together with the footballers to commit bribery between Nov 1 and Nov 27 last year. Boateng, 22, of Davidson Road, Croydon, and Adelakun, 23, of Mayfield Crescent, Thornton, are alleged to have requested and agreed to receive a payment of €450 (£366). Both have since been sacked by Brighton-based Whitehawk FC, who play in the Conference South. Swaibu, 25, of Tooley Street, Bermondsey, London, who left the same club in November, is accused of requesting and accepting £3,000 from Ganeshan, of Hougang Avenue, Singapore, and Sankaran, of Hawthorn Road, Hastings. Matches involved in the alleged fixes took place in Manchester and elsewhere between Nov 1 and Nov 26 last year. All five men pleaded not guilty to the various charges at Birmingham Crown Court in March, with the players bailed to reappear on Monday for the start of what is expected to be a five-week trial. Ganeshan and Sankaran were remanded in custody. Monday’s trial begins while the NCA continues to conduct a separate match-fixing investigation that resulted in 13 arrests last month.

New match-fixing charges are being pushed through by the Government before the Cricket World Cup. The legislation, introduced by Sport and Recreation Minister Murray McCully earlier this month, would introduce a maximum sentence of seven years' jail for New Zealand athletes or officials who deliberately influenced an event for betting purposes. The Government was concerned about the holes in New Zealand law in relation to match-fixing and spot-fixing, especially because this country was hosting two major international sporting events next year, the Cricket World Cup and under-20 Football World Cup. At present, athletes can be sanctioned by sporting bodies for these activities, but not charged with a crime. In order to get the anti-corruption measures passed in time for two major events, the bill will have a narrow focus - it will only introduce an offence for improperly manipulating a sports event. New Zealand authorities will be able to prosecute if any of the match-fixing process - a discussion, a transaction, or the actual game - took place in New Zealand. If a player put their betting earnings in a New Zealand bank account, they could also be liable for prosecution. Match-fixing by a New Zealander, which took place entirely in a foreign country, would not be captured by the new bill. The legislation would not criminalise a player for using inside information for betting, or for failing to disclose approaches by a person wanting to fix a game. These activities would, however, be against the rules in a new corruption and match-fixing code which was not legally binding. Asked about the match-fixing investigation yesterday, Prime Minister John Key said he thought the investigation would reflect badly on the individuals involved, but would not taint New Zealand sport "or New Zealand as a whole".