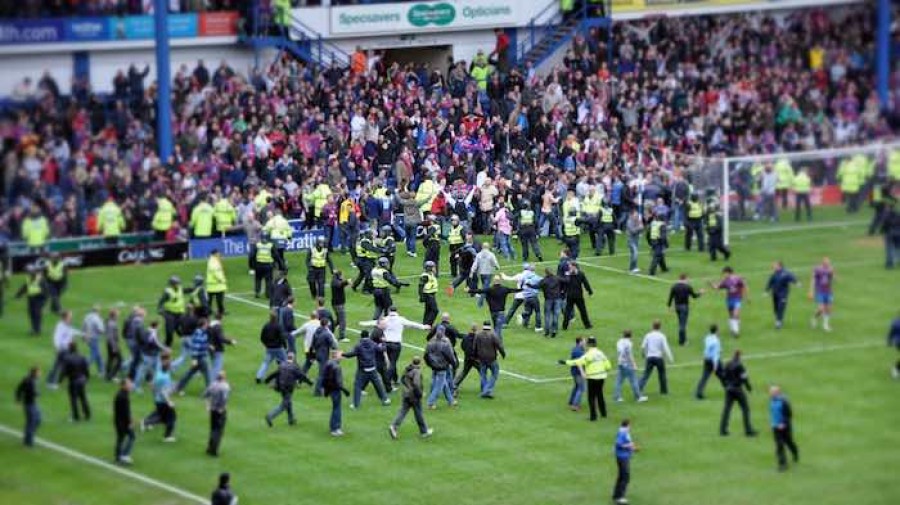 In scenes reminiscent of football’s darker days 7 March 2015 saw two pitch invasions1 at Villa Park.  The first took place in stoppage time when a small number of Villa fans ran onto the pitch, forcing referee Anthony Taylor to halt the game. This group were persuaded to remove themselves from the pitch by the mass booing from the remaining fans, the urging of the players and for some the actions of stewards.  They did not return to the stands but instead lined the edge of the pitch, braced to return after the final whistle.

Sure enough Taylor’s signal to end the game was also the signal for a mass pitch invasion. The early group were this time joined by thousands more with stewards helpless against the onslaught. Fans made a beeline for the players who were trying to make it to the tunnel. Fabian Delph, Villa’s captain and one of the goal scorers described it as‘dangerous, my arm band got nicked, someone tried to take my boot off my feet, people tried to kiss me and they were biting me, it was crazy’.2 If this was the reaction to a “hero” of the game, one can only imagine what West Brom players experienced as they tried to make their way to the tunnel. Police and stewards focussed their limited resources on dividing West Brom fans and Villa fans. Lest it should be said that only Villa fans were responsible, there were also reports of West Brom fans ripping up seats and throwing them onto the pitch.

Both West Brom and Aston Villa are co-operating with the FA investigation into the incident. A number of arrests have been made and it is expected that more will follow after a review of all the footage available.

Villa has now been charged3 with failing to ensure that no spectators or unauthorised persons were permitted to encroach onto the pitch.

Anyone who has had half an eye on the news in recent days, weeks and months will know that the events at Villa Park are not isolated incidents of disorder by English football fans. Examples have included:

Grahame is a barrister at Littleton Chambers and a member of Littleton’s Sports Law Group.  In addition to sports law, he specialises in employment and commercial work.

Lydia is an active member of the Littleton Chambers Sports law group. In line with the broader chambers specialisms Lydia’s core areas of practice are commercial law and employment law.  Lydia’s commercial practice encompasses disputes including contractual interpretation, professional negligence and directors’ duties.  Lydia’s employment work has a particular focus on disability discrimination but also incorporates all areas of tribunal disputes and high court action in relation to bonuses and restrictive covenants.