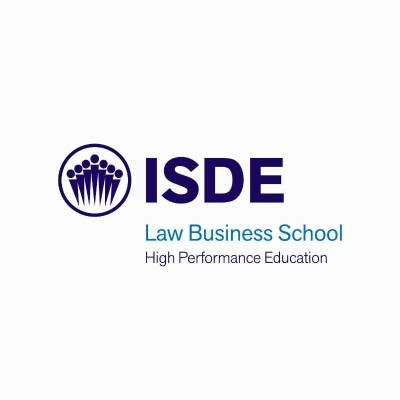 The Master in International Sports Law is considered the reference in terms of excellence in the sector.

It guarantees the path to a successful career, the best creation of a proven professional network within an exclusive market and job placement at the end.

This Master in International Sports Law has been designed for graduates in Law and for other people interested in developing their career in the world of sports law.

One of the requirements to be admitted to the program is to be able to dedicate one year to full time. On the other hand, it is also mandatory to have an advanced level of English since this is the official language of the program and, therefore, all classes are taught in English.

It is also compulsory for all the students to have a very good command of the English language in written and oral form.

ISDE Alumni Employment Network and Networking with over 10,000 alumni, professors and program directors, made up of more than 200 professional firms from more than 30 countries.

I. INTRODUCTION TO SPORTS LAW

II. INTERSECTION OF SPORTS LAW WITH OTHER AREAS OF LAW

IV. FOOTBALL GOVERNANCE IN THE WORLD AND EUROPE

VII. INTERSECTION OF SPORTS LAW AND SWISS LAW IN EUROPE

X. SPORTS LAW IN THE UK (COLLABORATION WITH UNIVERSITY OF CAMBRIDGE)

XI. SPORTS LAW IN THE US

*To be spread out throughout the entire academic program.

*The Academic Program is subject to modifications should ISDE Academic Team or the Director of the Master program consider it appropriated.

In addition to his work with ISDE, our academic director is an international sports lawyer at Nemetz & Kuhnen Advocacia, Luís works in the following areas of expertise; Sports Law, Corporate Law, Contract Law, Tax Law and Labor Law since 2004. Mr. Novaes coordinates the firm’s Corporate Law Department and is a member of the firm’s Managing Board, together with senior partners Luiz Carlos Nemetz and Evaristo Kuhnen.

Professor of History of Law, Law of Obligations and Corporate Law at FAE/Blumenau.

In addition to his work with ISDE, our academic director is an international sports lawyer and principal director at Parmars: Sports, which has bases in the UK and Spain. He was Called to the Bar by The Honorable Society of the Inner Temple, and has previous experience in Criminal Defence.

Working on all aspects of representation, management and legal advice, Dev assists top class athletes and coaches from the English Premier League down, and in other key countries. Dev’s key role within the inaugural edition of the Indian Super League in 2014 also marks him as an important connection within the region.

His work ethic has been roundly praised by numerous peers and leaders alike, with his strong willed belief in passing practical knowledge to students at the earliest stages has impressed many across the globe. Dev remains a mentor to dozens of students and young professionals, working closely with several colleges and universities in this respect.

Dev has been invited to speak in Africa, Asia, Europe, Middle East and South America. In 2012 Dev was nominated for both the London Organising Committee for the Olympic and Paralympic Games ‘Inspiring Person in the Community’ Award, and as a Barclays ‘Future Black Leader’ for the Top 100 of 2013.

Dev is personally supportive of all ISDE students and is happy to assist students with developmental pathways to ensure that they take the best next steps in their respective careers.

*The faculty is subject to modifications