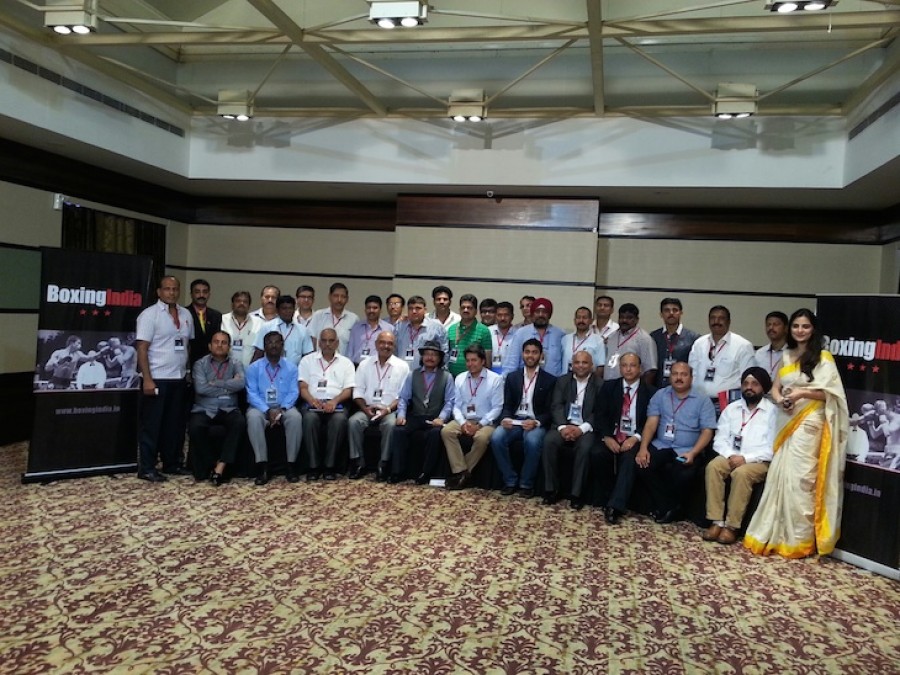 June 27th 2014 – Boxing India (The Bout Outside the Ring) was formally ratified today by an enthusiastic gathering of 26 state boxing associations from across the country. In early May, Boxing India received provisional approval from AIBA to form a new federation that would govern the sport of boxing in India.
Post receiving AIBA approval, the meeting was called by Boxing India earlier this week to share with the state boxing associations the group’s long term vision for boxing in India. During this meeting, Boxing India presented a comprehensive five-year developmental plan to achieve this vision on the basis of which they had received AIBA recognition and approval.  This five-year plan included a detailed roadmap for the state associations and the national federation to be formed.
“We have been official sponsors of boxing since 2008 and are committed to this sport for the long term which is why it is heartening to receive the support of most of the State Presidents, who are passionate about boxing and have spent their lives working towards improving the sport in India. Our goal at Boxing India is solely to enhance the sport and provide a platform through which our boxers can shine at the international arena. We are determined to create a federation that is not only transparent but inclusive and would welcome the support of all the state associations”, said Mr. Sandeep Jajodia, Chairman and Managing Director, Monnet Ispat & Energy Limited.
“This is a very historic moment as 26 states gather to form Boxing India. Supported by a formidable team, Boxing India aims to reinvent and reposition the sport of boxing with a more professional approach. We want to implement a strong system that will nurture the dearth of talent in India and permeate to the grassroots of the country. Our proposal has received positive feedback from most of the state associations who are extremely hopeful for a brighter future for boxing.” said Mr. Udit Sheth, WSB India Franchisee.
At this gathering a formal constitution proposed by Boxing India and approved by AIBA, was passed by the Table. As per a unanimous agreement by the state associations, Boxing India will host fresh elections for the new Executive Committee.
Boxing has been named amongst the priority Olympic sport in the country by Ministry of Youth Affairs and Sports. With the promise of a new federation in the near future, the sport is in capable hands that will ensure a better future for Indian boxers.