Amendments to Rules and Penalty Structures regarding careless and improper riding

The British Horseracing Authority (BHA) has today announced alterations to the wording of the Rules and the penalty structures associated with careless and improper riding, which will come into effect from 23 May 2016.

The objectives of the amendments are to provide a greater deterrent to riders from making manoeuvres that might impact on the safety or fairness of a race by causing interference, while simultaneously reducing the punitive impact on riders for the most minor offences.

The changes are the result of consultation with the Professional Jockeys Association (PJA) as well as the National Trainers Federation (NTF) and Racehorse Owners Association (ROA). There was a common feeling among those consulted that the Rules and penalty structures should be reviewed during the usual annual process. This followed a series of offences in high profile races in 2015 which suggested that the deterrents in place were not sufficient to prevent riders making a manoeuvre which they ought reasonably to have known would cause interference.

The changes to the Rules and penalties are summarised as follows:

Jamie Stier, Director of Raceday Operations and Regulation for the BHA, said:

“Safety and fairness are paramount in our approach to regulating the sport and these facets are at the heart of the amendments to the Rules and penalties we have announced today."

”Altering the definition of careless and improper riding means that manoeuvres which ought to have been obvious would cause interference are now categorised in the more serious category of ‘improper riding’. This offence carries a greater penalty range than ‘careless riding’ and this should serve as a greater deterrent to riders making such manoeuvres which could potentially undermine the safety of riders and horses, and the fairness of a race."

“We will monitor the impact of these changes. We are grateful to the PJA for their constructive participation in this project.”

The alteration to the penalty range for careless riding serves to, at the top end, provide a greater disincentive to ride in a careless manner, and at the same time, by dropping one day suspensions, ensure that riders are not incurring unwarranted suspensions for minor offences.

“We are aware that niggly one-day offences may seem a minor penalty, but they do have an impact on jockeys as it causes them to lose potential earnings for a day."

“We have agreed with the PJA that it is appropriate to commence applying suspensions for careless riding at a level of offence which has previously incurred a two day suspension. Therefore offences which would have incurred a one-day suspension will now instead attract a caution.”

In order to illustrate how the revised Rules and penalties would operate, the BHA has compiled a short list of offences from races in 2015, some of which were high profile, to show how the offences would be categorised, and what the penalty may have been, under the new structures. 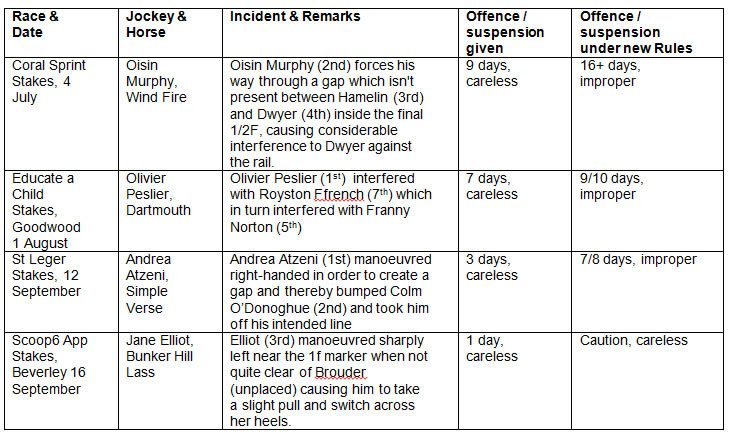 "The BHA approached us earlier this year and we had several meetings with them. The meetings were constructive and we understood the concerns of the BHA regarding more serious cases of interference. We accepted that a change was going to be made in this regard and are pleased that we've been able to influence the end result."

"In particular, persuading the BHA to remove any penalty for minimal interference will be a welcome step for jockeys, and looking to the future the potential to expand flexible suspensions for bans of up to four days - once IT systems allow for that - will make a significant difference to all jockeys."

"The changes to the Rule and penalty structure should - if Stewarded as intended - only impact those who barge out or knowingly cause interference, and also those small number of instances where significant interference has occurred but stops short of being dangerous."

As part of the same process the BHA, again in conjunction with the PJA, has also considered the penalty structures in place for whip offences.

Despite a rise in the overall number of offences in Group/Grade 1 races in 2015 (more detail), a more detailed analysis of all races, which focused on offences of 7 days+ in races above a threshold financial value (namely £20K and above in Jump Racing and £27.5K and above in Flat races) did not show any trend towards an increasing frequency of such offences.

As a result of this, allied with the significant overall downward trend in the number of offences, we have decided to maintain the current penalty structure at present.

“We remain satisfied overall with the way in which British riders are adhering to the whip Rules. We are encouraged by the ongoing decrease in the number of whip offences."

“The increased number of offences in Group or Grade 1 races in 2015 did prompt us to undertake a more detailed analysis of the data to see whether a trend was developing. That analysis revealed no evidence to support the development of such a trend."

“We do not see a need for further review of the penalties for whip offences as long as the downward trend in breaches continues, including those in high-value races."

“The British jockeys at Cheltenham recently showed that it is possible to ride within the Rules in valuable races. We expect riders to continue such an approach throughout the remainder of the Jump season and into the Flat season.”