The British Horseracing Authority (BHA) has today announced the publication of the first phases of a number of major research and related education projects to help understand the impact on the physical and mental wellbeing of riders of a career in racing.

The initiatives continue the agenda being driven by the BHA’s Chief Medical Adviser Dr Jerry Hill that jockeys are elite athletes and should have the lifestyles, support, education and fitness to match.

The first research project, taking place at Oxford University’s Botnar Research Centre and funded by the Racing Foundation, is exploring the health and musculoskeletal consequences of a career in horse racing in both the short and long term, in order to aid the development of ways to improve the welfare of jockeys and ride-out stable staff during and after their racing careers.

The project has three strands, the first of which has collected data from DEXA bone and body composition scans from 187 newly licensed jockeys via the British Racing School and Northern Racing College over a five year period.

Results of that data show that 30% of male Flat jockeys have reduced bone density compared to an expected 2.5% of men from the general population of a similar age. The same data set also show a higher body fat percentage (14%) versus athletes in similar weight related disciplines such as boxing (8%).

The next stage of the project will now be to follow those jockeys over a season to understand how body composition and bone density - as well other factors such as entry level fitness - influence time off riding from injury and success in their careers in the longer term.

The final strand of the research has collected self-reported data from over 250 retired jockeys to understand the consequences of a career in horse racing on long term health, and their view of their career as a jockey. Initial results from this are expected later this year.

Dr Jerry Hill, Chief Medical Advisor for the BHA, said: “The results of Julia Newton and her Oxford teams’ initial research are significant but come as no surprise. When athletes compete in a weight-making sport but their schedules make it difficult to access and follow the correct guidance on how to remain fit and healthy then the demands are going to take their toll on the body.

“This research confirms our suspicions and provides us with scientific data to help guide future developments on tackling the issues raised, and gives us extra impetus to continue to work with other industry bodies to support the physical and psychological wellbeing of riders, helping them to have longer, healthier careers and less time off injured”.

Dr Julia Newton for University of Oxford, said:  "These findings are really important. It is the first step in improving the health of current and future jockeys. The next step is to understand how to keep jockeys riding for longer, with less injury and greater performance. To do this we need more young jockeys to be part of this Oxford study".

As part of the project, a cross section of the racing industry including jockeys and their support network, made up of trainers, agents, jockey coaches and racecourse clerks, were interviewed in order to try and understand the current landscape around issues such as eating, nutrition and working schedules.

The results indicated that an industry-wide awareness of archaic weight-making practices and some of the associated health implications exists in British racing. It highlighted a perception that social factors such as support networks and racecourse food provision can significantly impact dietary practices and jockeys’ relationships with food, as well as the focus often being on the horse, rather than the jockey, as an athlete.

The study also found that a lack of nutrition education may inhibit the development of professional athletic tendencies and perpetuate the current issues.

Now that the data has been collected, the focus of the project will shift towards how the identified issues can be addressed and what educational or practical measures can be put in place to help riders make the most of the current resources available and ensure they are well equipped to deal with the challenges of being an elite athlete in a weight-making sport.

Dan Martin, PhD researcher at Liverpool John Moores University and director of the jockey nutrition study, said: “I’m pleased to be able to present this research to the industry that starts to shed light on why jockeys maintain hazardous weight management techniques.

“This research highlights some good practice within the jockeys’ support network in assisting with weight management, however also identifies that much more can still be done by many others.

“Education appears to be key.  Education for jockeys is the priority but a more knowledgeable support network may also alleviate some of the current social influences on poor weight management.”

One such measure due to be rolled out around weighing rooms in the near future is an impactful poster campaign with the hashtag #JockeyAthleteDiet, which will seek to educate riders about the health risks of undertaking repeated drastic and harmful weight loss measures and their negative effect on performance.

The posters have been developed in conjunction with the Professional Jockeys’ Association Nutrition Team (PJA) and also list the nutritional and fitness support available to riders through the PJA, BHA and John Moores University. 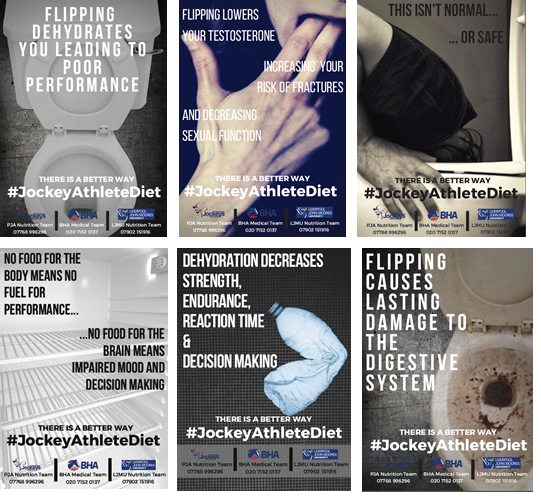 Hi-res versions of the posters are available on request.

Dr Jerry Hill added:“The research carried out by Dan Martin and Liverpool John Moores confirms many people’s belief that as an industry we need to better support jockeys, trainers and racecourses in providing information about the vital importance of good diet and nutrition to improve wellbeing, reduce injury and improve performance.

“The #JockeyAthleteDiet campaign is one of the first visible outcomes of our nutrition research, which we hope will have a positive impact. It is intentionally hard-hitting and focuses on emotive subjects such as so-called ‘flipping’ and dehydration. Our objective is to show our jockeys that “there is a better way”, which will be the campaign’s strapline”.

Paul Struthers, Chief Executive of the PJA, said: “A lot of progress has been made in this area thanks to the work of and support offered by the team at Liverpool John Moores University, the IJF and the PJA’s own Nutrition Team. There is also increased focus on nutrition and fitness as a result of changes implemented out of the Jockey Training & Development Strategy, and last year saw the launch of the #JockeyMatters series of videos produced by JETS in partnership with the PJA.

“However, the initial phase of Dan’s PhD clearly demonstrates that much more still needs to be done and his ongoing work will be hugely important in shaping that enhanced education and provision.”