Statement on Rule 50 of the Olympic Charter 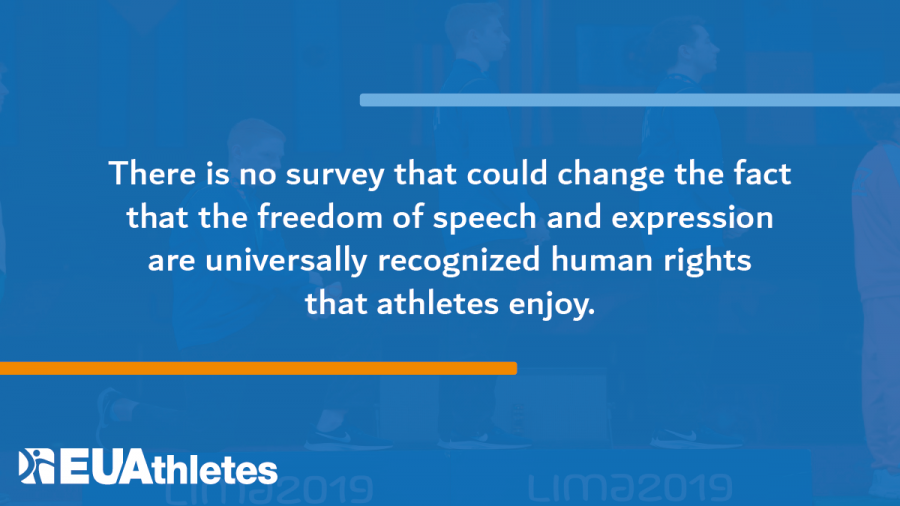 EU Athletes has noted the report and recommendations from the International Olympic Committee (IOC) Athletes Commission which were approved by the IOC Executive Board on the 21st of April 2021. We are deeply concerned by the decision taken by the IOC and believe that the consultation process and the rule 50 itself are not compatible with the human rights of athletes.

By restricting its consultation to the Athletes Committees and Commissions, the IOC Athlete Commission disregarded the voices of thousands of athletes being represented by the independent unions and associations, as well as their human rights such as freedom of association and the right to organize. Regardless of numerous issues related to the methodology of the IOC AC consultation, there is no survey that could change the fact that freedom of speech and expression are universally recognized human rights that athletes enjoy.

The IOC’s approach to freedom of speech and expression consists of an attempt to restrict, redefine and control the way that the athletes exercise their fundamental human right. Threatening to sanction athletes who peacefully protest on issues such as racism is not only inconsistent with human rights, but also goes against the values that the IOC claims to support.

The idea that a sport organization can restrict or redefine the human rights of athletes is simply unacceptable. These rights, including the right to protest, are recognized and guaranteed by national constitutions and international human rights instruments. We are calling on governments, international organizations, and sport stakeholders to encourage the IOC to amend rule 50 and allow peaceful demonstrations on issues that are important to athletes and wider society.

EU Athletes continues to work to ensure that the athletes we represent enjoy the same fundamental rights as any other European citizen. We are committed to working with our members and the player association movement to support athletes who wish to peacefully protest or demonstrate on issues such as human rights or social justice, in whatever way they choose.