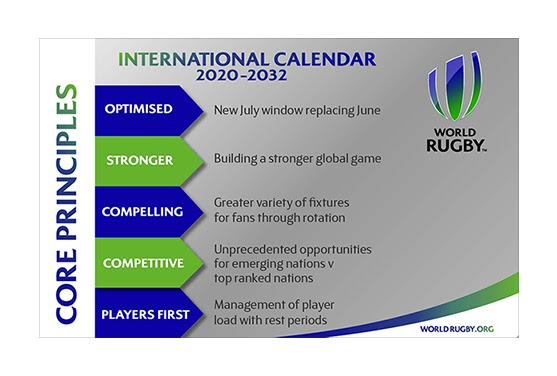 A major priority for World Rugby Chairman Bill Beaumont following his election in May 2016, the optimised 2020-32 schedule sets new standards by prioritising rest periods, promoting equity for the sport’s emerging powers and harmonising the relationship between the international and domestic games.

The optimised calendar retains three existing annual international windows (northern hemisphere, southern hemisphere and November), but the June window will be replaced by a new July window. This will enable the Super Rugby season to run uninterrupted and enhance preparation for July tests for all unions, while also providing a strong base to support the continued growth of the club game.

With rugby experiencing record global participation, fan-base and commercial growth, the schedule aims to accelerate the competitiveness of international rugby through unprecedented and annual opportunities for the Pacific Islands, USA, Canada, Japan and the European nations, including Georgia and Romania.

Emerging rugby powers will be integrated into the July and November windows, providing annual opportunities against the SANZAAR and six Nations unions across July and November. In addition, a rotation principle that includes emerging rugby powers will deliver greater schedule equity, promoting more meaningful, compelling fixtures and supporting World Rugby’s objective to increase the competitiveness of the global game:

Player welfare is World Rugby’s number one priority and the calendar has been agreed with the full support of the International Rugby Players’ Association (IRPA).

Beaumont said: “Agreement on an optimised global calendar that provides certainty and sustainability over the decade beyond Rugby World Cup 2019 represents an historic milestone for the global game.

“But more than that, this agreement has player welfare and equity at heart, driving certainty and opportunities for emerging rugby powers and laying the foundations for a more compelling and competitive international game, which is great for unions, players and fans.

“This process has been complex and there was no silver bullet. Compromise has been achieved by all stakeholders in the spirit of collaboration and I would like to thank my union, professional league and club colleagues for their full contribution and commitment to reaching an agreement that will ultimately benefit the whole game.”

The schedule represents a significant boost for emerging rugby powers such as Georgia, who have automatically qualified for Rugby World Cup 2019, with President Gocha Svanidze adding: “We welcome this agreement, which is great news for Georgia. Like many other unions, we want opportunities to take on the world’s best outside of a Rugby World Cup and this schedule will achieve just that. We have a strong base from which we can progress our ambitions and I would like to thank World Rugby for driving these important opportunities.”

The players have also welcomed a schedule that provides certainty and prioritises player welfare as IRPA CEO Rob Nichol explains: “We welcome the agreement of a calendar and appreciate the genuine consideration given to the player welfare needs of the world’s top players throughout the process by everyone involved. Through collaboration, rugby has delivered a framework that promotes certainty for the international game moving forward. The agreement provides an improved platform for the various professional competitions to structure themselves in a way that will help them succeed while also managing the demands on the players involved appropriately. The players, competitions and the game will be better for it."

With agreement reached on the season framework, discussions will continue among the relevant unions regarding the duration of the Six Nations and the British and Irish Lions, while the major domestic leagues will now be able to start planning start dates and schedules. The full detail of the annual fixtures will be announced in due course by individual unions.

With the optimised calendar now approved, the World Rugby Council will consider at its Annual Meeting in Kyoto, Japan in May the consequential Regulation 9 amendments regarding player release for the revised windows.