Lord Dyson, one of the leading lawyers of his generation, shares his perspective on sports law - E87 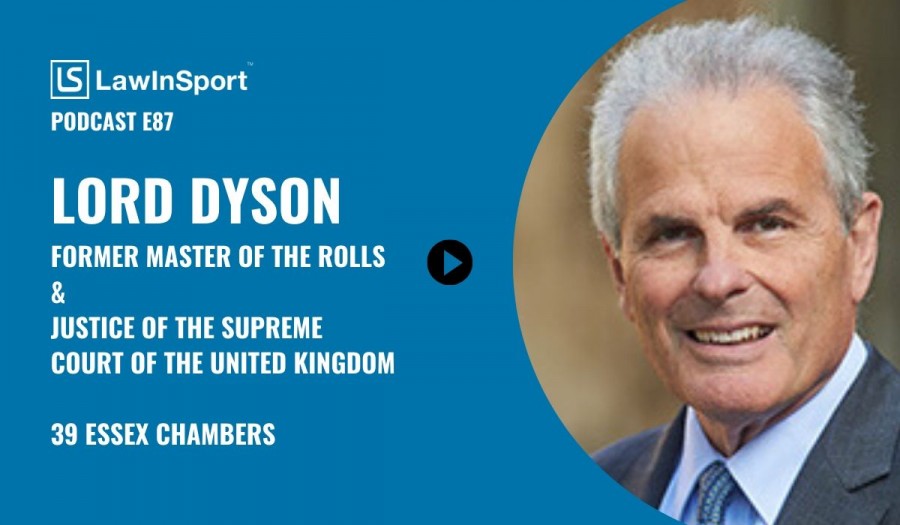 Described “one of the leading lawyers of his generation”, Lord Dyson was Master of the Rolls (President of the Court of Appeal of England and Wales and Head of Civil Justice) for four years until he retired in October 2016. He was a Justice of the Supreme Court of the United Kingdom from April 2010 until October 2012.

Over his career Lord Dyson has been involved in many high profile sports cases, some resulting in the establishment of the Premier League and the introduction of all-seater football stadiums in the UK. More recently he has adjudicated the Peter Beardsley racism case for The FA and the Saracens Salary Cap case for Premiership Rugby.

In this interview Lord Dyson givens a detailed insight into his career and shares his thoughts on the state of sports dispute resolution as well what it takes to achieve a magnificent career in law.

He recently published his memoir ‘John Dyson - A Judge's Journey’, which I recommend reading. It is available at all good bookstores and online. All the proceeds going to charity.

**A version of transcript of the podcast will be available to Plus members soon.

Lord Dyson was called to the Bar by the Middle Temple in 1968 and was awarded a Harmsworth Scholarship. He was Treasurer of the Inn in 2017.

From 1968, he practised in Keating Chambers and was appointed QC in 1982. In 1986 he accepted an invitation by 39 Essex Chambers to become Head of Chambers, a position he held until 1993 when he was appointed to the High Court.

In his long judicial career, he decided many cases across the whole range of civil law, including contract, construction and commercial law, general common law, international law, and public and human rights law. Many of his judgments are reported in the Law Reports and are frequently cited as precedents throughout the common law world.

At the Bar, whilst at Keating Chambers, he practised mainly (but not exclusively) in the field of construction law. At 39 Essex Chambers, he had a more diversified practice, including in the field of general common law, commercial law and sports law. He acted in many high profile cases. He also appeared as counsel in many arbitrations and was appointed as arbitrator on various occasions.

Since retiring from the Bench he has been accepting appointments as an arbitrator and mediator in both domestic and international arbitrations.

He has lectured extensively on a wide range of subjects in the UK and abroad, including in Hong Kong, Singapore, Malaysia, US, Australia and New Zealand. He has given lectures to the Chartered Institute of Arbitrators on mediation and arbitration. He gave the Mustill lecture in 2013 on Arbitration and the Brussels 1 Reform.

He has participated in legal exchanges with judges and lawyers from other jurisdictions, such as US, Canada, Singapore, Hong Kong, South Africa, Israel, France and judges of the Court of Justice of the European Union and has contributed papers on these occasions.

He is a member of the Court of Arbitration for Sport (CAS), the Sport Resolutions Arbitration Panel, The Football Association’s Judicial Panel, LCIA and ICC.