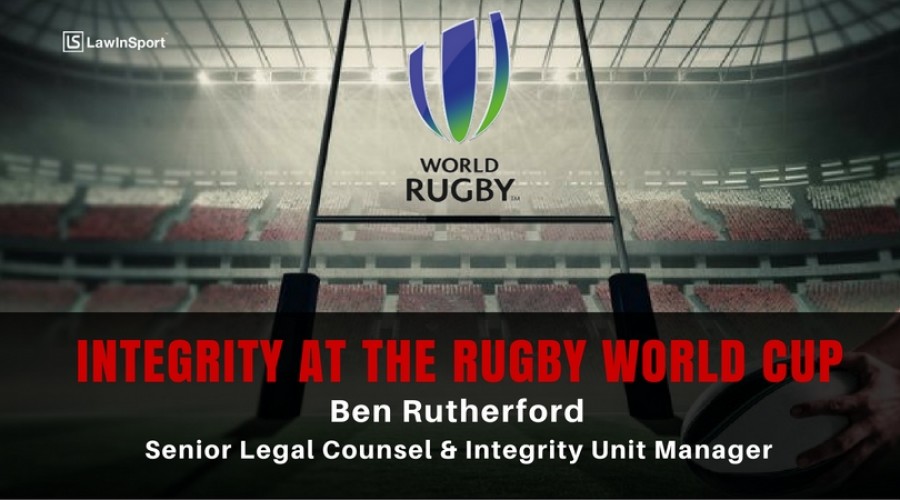 In this audio and written interview, Ben Rutherford, Senior Legal Counsel & Integrity Unit Manager talks to LawInSport's CEO, Sean Cottrell, about how the World Rugby implement and monitor processes to protect the integrity of the Rugby World Cup.

In this interview Ben describes:

On the 14 November World Rugby host the World Rugby - Sports Integrity Forum in London. To see the full program and find out how to register click here.

The written interview below is a summary of the interview and not a full transcript.

The three key elements to World Rugby’s Rugby World Cup 2015 integrity framework were regulation, education and operation. Without one or other of those elements, the system would not be able effectively to disrupt potential corrupt activity or enforce any breaches.

World Rugby has had longstanding regulations prohibiting corruption and betting in the game. However, in 2011 in light of the emerging prevalence of online gambling and issues in other sports we commenced a full review of both our regulations and operations in this area. We consulted with a large number of other sports with experience in the area and regulatory and policing bodies in a number of countries. This led to an expansion of World Rugby Regulation 6 from mere prohibition of match and spot-fixing and betting on one’s own matches to all betting on professional rugby by not just players and match officials but also administrators and team staff. Rules were also enshrined preventing misuse of inside information and corrupt approaches and obliging the reporting of suspicious activity. World Rugby was also provided with enhanced investigative powers and the ability to introduce rules with respect to the use of mobile devices on match days for specific tournaments. This latter provision was implemented for Rugby World Cup 2015 prohibiting players, match officials and certain team staff from using mobile devices from 50 minutes pre-match (simultaneously with the coin toss) through until final whistle as an added protection against inside information leaks.

Upon this regulatory foundation, World Rugby was able to build the framework for protecting Rugby World Cup 2015. Integrity is in many respects a player welfare issue, as demonstrated by issues in other sports, and education of our athletes and officials is central to protecting their wellbeing. To that end, World Rugby established an online education programme available in 14 languages jointly with input from the International Rugby Players’ Association and a number of other stakeholders in the game. The programme, which focused on interactive education in relation to the rules, obligations and risks, is freely available online at integrity.worldrugby.org and was made compulsory for all players, team officials and match officials prior to the tournament. The online programme had already been used and thoroughly tested for two years prior to Rugby World Cup 2015 in World Rugby’s age-grade world championships, regional tournaments and HSBC Sevens Series as well as by participants in various Union competitions. The online programme was then supplemented by a brief in-person education session for each team and all match officials upon arrival in England and Wales prior to Rugby World Cup 2015 delivered by a RWC Integrity Officer. The aim of this session was to highlight key risks and recent cases from other sports to participants, give them the opportunity to ask questions and build a rapport with the Integrity Officers to facilitate reporting of any issues during the tournament. World Rugby had also used and tested such sessions for the previous three years in its other tournaments and tailored these ones to the specifics of Rugby World Cup, including the vastly increased betting interest.

The RWC Integrity Officers were a central part of the operational element of the Rugby World Cup 2015 integrity structure. World Rugby partnered with the Gambling Commission and contracted a betting monitoring provider (which had also been tested for the preceding three seasons in other World Rugby events), along with having memoranda of understanding in place with certain betting operators. Intelligence obtained through those sources was able to be passed down to Integrity Officers who were stationed in each venue and around team and match official hotels in regular consultation with hotel, team and match official security personnel. Similarly, reports received from teams, match officials or hotels of any potential suspicious activity could be investigated by World Rugby and appropriate action taken. In advance of the tournament we also established a strong working relationship with the National Crime Agency and UK police, which had a coordinated approach across the various regional forces with a police representative stationed within the tournament offices, facilitating rapid, coordinated responses to any security issues where required.

The final operational element was the ability to apply for provisional suspensions on an expedited basis through the Rugby World Cup independent judiciary, who were in situ in London, in the event that an investigation revealed that an individual associated with the tournament had a prima facie case to answer in relation to a breach of World Rugby’s integrity regulations. Thankfully this was not a provision we had any cause to use however it could have been critical in the event that credible information emerged of an infiltration of a team or individual, for example, to ensure the integrity of the tournament could be quickly protected in the interim while the criminal processes, which often take many months, were concluded.

A number of sports around the world with more historical experience than rugby in dealing with corruption threats, including the International Olympic Committee, various racing bodies, cricket, tennis, football, rugby league and Australian rules football, were very generous with their time and expertise during our consultation process in 2011 and 2012. We were also grateful to a number of them who supplemented our Integrity Officer team with some of their integrity personnel for Rugby World Cup 2015 enabling us to cover the length and breadth of England and Wales with sports integrity expertise for the seven weeks of the tournament.

Delivering education in all of the relevant languages at a tournament the size of Rugby World Cup 2015 is a challenge, however the online programme enabled us to ensure that all of the key messages were effectively transmitted in the players’ and officials’ native tongues before they attended the in-person sessions. Where necessary these sessions were delivered through a translator however the prior knowledge all attendees had of the rules and the risks ensured that these sessions could be focused at a high-level rather than having to delve into the detail again orally, which can be more cumbersome through an interpreter.

The other issue we were pleased with was how the players and officials responded to the Integrity Officers as Integrity Officers have not previously been deployed in such numbers around a rugby tournament. However, the reception was entirely positive and players were very quick to report interactions they had with members of the public to Integrity Officers where any questions were asked around line-ups or other potential inside information, for example, just in case there was a possible integrity concern. This allowed us to be proactive rather than reactive and reassure teams and hotels around security.

With an event the size of Rugby World Cup 2015 and the huge interest in the tournament from betting markets there is always a concern where there is money to be made that nefarious individuals or syndicates may seek to profit. This was why educating our players and officials of the types of issues they needed to be aware of and the reporting mechanisms, and building the integrity framework which lay behind that, was so important to ensure that rugby presented a “hard target” to any such corrupters. Simultaneously, we were also concerned whilst building that system and delivering that education to ensure that our players and officials understood that the system was there principally to protect them, rather than to police them, and that they were a key partner in providing any relevant information to us to facilitate that.

The key metric is whether we delivered a tournament free from any corruption concerns and the Gambling Commission’s independent report has confirmed that to be the case, which also mirrors our own information. Also of great importance, the feedback from our teams and match officials was wholly positive which was very pleasing. They found their interactions with our Integrity Officers helpful and were keen to discuss possible concerns with them at the earliest opportunity so suspicions could be investigated as appropriate. While we had strong existing relationships with our partners at the Gambling Commission, police and the betting industry, and we had trialled the system at other tournaments and with other groups of players, this trust from the teams and match officials at Rugby World Cup 2015 was a real key to the system working so well. More broadly, both the Gambling Commission and the United Nations Office on Drugs and Crime have confirmed in their own independent reports that the Rugby World Cup 2015 model is a best-practice template for other events so it is a model we will continue to use in future tournaments, adapted as appropriate for the local jurisdiction.

Preparation and coordination with relevant stakeholders are pivotal to the successful delivery of such a programme at major event. Early engagement with relevant government and policing bodies in the host country is something we would highly recommend to ensure coordination of intelligence, investigations and communication. In addition to that, clearly having robust rules and investigative powers, a solid education programme and expertise in order to investigate and coordinate with local police will continue to be centrally important.