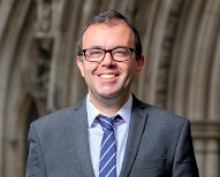 James is a dispute resolution solicitor with particular expertise in resolving sports disputes.  He represents sports individuals and governing bodies and has extensive experience in resolving contractual disputes in a variety of sports including motorsport, football, tennis, athletics, cricket and rugby union.

James also has particular experience in advising on regulatory and disciplinary issues.  He has acted for clients in proceedings involving the Football Association, the British Horseracing Authority, the Motor Sports Association and the Football League.  He is a keen advocate of Alternative Dispute Resolution and, in particular, Mediation, having settled a number of sport related matters through the ADR processes.

James also acts for event organisers and governing bodies in enforcing ticket terms and conditions to major sporting events.  He regularly acts for The All England Lawn Tennis Club, the Rugby Football Union, the Welsh Rugby Union, Chelsea Football Club, UEFA, and the London Marathon amongst others.

James is a member of the British Association for Sport and the Law and has delivered lectures on topics including reputation management and basic contractual rights.  James has written a number of articles on sport law such “Bloodgate: The downfall of Dean Richards” and “Twitter: Friend or Foe”.