For over 25 years, Adam has specialised in EU & competition law, including cartels, dominance, mergers, market investigations, antitrust litigation, public procurement, State aid, trading agreements and compliance.  He is well known to case officers and staff at the Competition and Markets Authority (CMA) and the European Commission (EC), having dealt with many mergers, dawn raids, investigations and leniency applications in many market sectors.

He has litigated many cases before the Competition Appeal Tribunal (CAT), other UK and EU courts, in arbitrations, and settled others using mediation.  Adam has also acted on a number of significant merger cases, for example, the clearance of the merger of British Salt and New Cheshire Salt Works, for which his team won The Lawyer's Competition and Regulatory Team of the Year award.

Adam is an EU & competition law specialist (see link on the left). For over 20 years, Adam has advised sporting associations, leagues and clubs with regard to the competition and commercial issues relating to their activities.

Recommended in Legal 500 for Sports law: “competition law specialist Adam Aldred focuses on the interface between competition law and sport, and advises on issues such as the collective selling of football rights to broadcasters and shirt sponsorship deals”

Adam acted for Allsports in respect of the OFT’s cartel investigation relating to the sale of England and Manchester United Football kits and the subsequent appeal to the Competition Appeal Tribunal, the first ever hearing of its type

Over the years, Adam has advised on various kit sponsorship deals 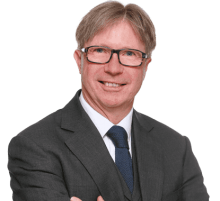