Martin is a busy senior junior who has progressed to dealing with substantial pieces of litigation (often appearing alone against Queen's Counsel). Martin has been ranked consistently in the directories as a leading practitioner year on year since 2006. He served on the Attorney General's Panel of Counsel for five years. He carries a broad practice as detailed below. His established background in both commercial litigation and employment law makes him well suited to issues in the sports law field and he is nationally recognised for considerable experience in all aspects of sports law litigation and is ranked in Band 1 for the Regions by Chambers and Partners UK. He also sits as an arbitrator in sports disputes, appointed by Sport Resolutions. He has appeared in more than 30 reported / published cases.

One of the most active juniors in this field outside of London with unrivalled experience across many issues in varied sports. Martin is ranked in Band 1 for the Regions by Chambers and Partners UK. He also sits as an arbitrator in sports disputes, appointed by Sport Resolutions.

Lugano v West Bromwich Albion FC -Representing the club at an appeal before the Court of Arbitration for Sport in Lausanne. Player“s attempt to strike down a unilateral option clause as unlawful.

Triple S Sports v Brady -Acting for the well-known football agency (which acts for Wayne Rooney & ors) in a High Court claim against a former employee for diverting a large agency commission.

Mario Balotelli v Manchester City - Representing the player in the proceedings before the Premier League Board. Very high profile dispute. The PFA considered it a test case on the question of whether on-field disciplinary offences could amount to a breach of the playing contract with the club.

Yaakov v West Bromwich Albion - FA Dispute Resolution Chamber case brought by agent against club for conspiring to cut him out of a transfer deal.

Frank Warren v Ryan Rhodes - British Boxing Board of Control hearing and then appeal before the Stewards.  Management agreement dispute.

Pat Magee v Kratindaengem - Obtaining a High Court declaration as to the validity of a promotional agreement.

Rugby and other sports 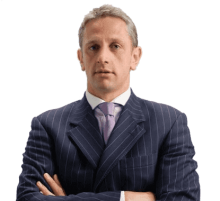