A leading specialist in chancery and commercial dispute resolution with emphasis on general commercial litigation, business law/disputes, insolvency, partnership disputes ( with emphasis on professional partnerships) and civil fraud. Has appeared at all levels Supreme Court/Privy Council and regularly appears in the Court of Appeal and High Court and in arbitrations. Also regularly appears in the Courts of the BVI at first instance and appellate levels. Very highly regarded for expertise and skills as a trial litigator with a considerable reputation for powers of cross examination, speed of thought and command of detail and overall tactical and strategic advice. Also a full member of Serle Court, Lincoln’s Inn.

Paul acted in a number of high profile commercial cases involving sports related issues and clients. Acted at first instance and court of appeal for Wayne and Coleen Rooney in connection with agency agreements, West Ham United in respect of claims for damages following the Tevez affair and demotion of a premier league club also acted for West Ham United in respect of claims by former manager and currently acting for high profile football managers. Regularly consulted by premier clubs in respect of commercial interest relating to football activities. 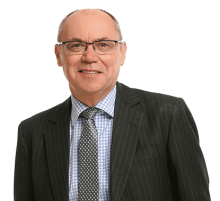