His recent criminal instructions have included cases at levels of seriousness and complexity that are unusual for his call: from large drugs conspiracies to terrorism. He has appeared in his own right in the Court of Appeal and the High Court on a number of occasions.

He also accepts instructions in regulatory crime. His recent cases involve prosecutions by the Environment Agency and various local authorities for regulatory offences.

In the fields of professional discipline and inquests, Robert has a busy practice representing medical professionals. He has a wealth of experience acting for doctors and nurses at inquests. He has prosecuted and defended at cases brought by a wide range of regulators including the GMC, NMC, ACCA and RICS.

Early in his career, Robert’s understanding of the needs of professional clients was developed during secondments across his practice areas: at the Environment Agency, a top-tier Sports Law firm, and working directly with the Director of the Criminal Division in Jersey.

He has been instructed to prosecute for the FA.

Last year he was seconded to a top-tier Sports law firm. His experience there has included work with a number of sports governing bodies, from the French Rugby Federation to the Greyhound Board of Great Britain. It has also involved cases at a range of tribunals including the FIFA DRC and CAS. 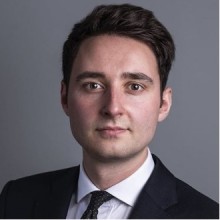