Ben practises in all aspects of commercial dispute resolution.  Most of his work is in the Business and Property Courts and he regularly appears across the Northern, North-Eastern and Midlands Circuits and in London.

Within his broad commercial practice Ben has developed specialisms (detailed further below) in insurance, insolvency, professional negligence and construction.  He also has a growing sports law practice, having acted for a number of football clubs.

Ben approaches every instruction with intellectual rigour, attention to detail, commercial pragmatism and speed.  His attitude is that cases are won on the facts and lost on the law, so that it is essential to identify and analyse the key issues early to achieve the best result for his client.  He is also aware of the ever-pressing need to give a firm, clear view on prospects, for the benefit of client and insurer/funder.

Ben acts predominantly as sole Counsel and has been led by chambers’ silks on a number of occasions.

Ben is a member of Kings Sports.

He has acted for a number of football clubs in relation to commercial and sports matters, a recent highlight being a high-profile claim by Manchester City Football Club and the City Football Group for worldwide injunctions against persons unknown to protect their global premises from trespassers (and in particular a group of urban climbers who climbed on to the roof of the Etihad Stadium in Manchester in 2017 and put a video of them doing so on social media).  Ben was led by David Casement QC, instructed by Pinsent Masons LLP, and successfully obtained far-reaching interim injunctions.

Ben has also acted in a substantial dispute between a Premiership player and his former agent.

He is keen to develop his sports law practice.

Manchester City Football Club Ltd & Ors v. Davies & others (2017) – Manchester Business and Property Courts - claim against group of urban climbers who had climbed on to the roof of the Etihad stadium in Manchester for worldwide injunctions against them and persons unknown preventing entry on to the Club and parent group’s premises.  Led by David Casement QC.  Interim injunctions obtained. 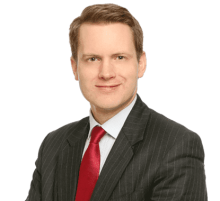