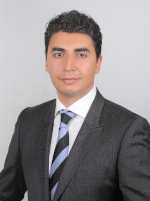 Emin ÖZKURT is Managing Partner at Ozkurt Law Office. He holds a degree from the University of Istanbul, Faculty of Law and also has an LLM from The University of Manchester in International Business Law.

Mr. ÖZKURT is an International Arbitrator also an independent Legal & Sports Consultant with experience across a broad range of disciplines including Corporate, IT, Regulatory, IP Law, Dispute Resolution, Competition and Commercial Law fields. He has done work in a number of sectors such as Telecommunications, Sports, Gaming, Company, Financial Services, Media and Retail.

Emin is the sole Turkish Arbitrator at the Court of Arbitration for Sport (CAS) in Lausanne, Switzerland.

Emin ÖZKURT is also one of the nine founding Arbitrators at the newly created EuroLeague Arbitration Panel namely as EuroLeague Basketball Dispute Resolution Chamber based in Lugano, Switzerland.

He particularly has an extensive knowledge and experience in sports law and its regulation. Throughout his career, Emin has acted for athletes, coaches, agents, clubs and federations in a variety of different matters, including contractual claims, doping infractions and disciplinary appeals.

Throughout his career, Emin represented his clients in many cases before the FIFA's Dispute Resolution Chamber (FIFA DRC), UEFA Disciplinary Bodies, Basketball Arbitral Tribunal (BAT), Court of Arbitration for Sports (CAS), Swiss Federal Tribunal and before the Turkish Sporting Bodies.

Moreover, Emin is very active on the newly growing field of esports. He is a Board Member of the Turkish Esport Federation. He drafts the regulations of the Esport Federation and leading the legal scene on this field in Turkiye. It can be said that Emin sits at the intersection of the esports and traditional sports industries, working with major sports teams and agents as they expand their businesses into esports.

Furthermore, Emin ÖZKURT is a professor in sports law and gives lectures on sports law at several venues such as the prestigious Instituto Superior de Derecho y Economía (ISDE) Master in International Sports Law, Union of Turkish Bars and also many Universities in Turkey.

Emin participates in numerous international seminars and conferences about sport law and he has many articles published on this subject.

He is also member of the Editorial Board of “LawInSport” and "Football Legal" both of which are prestigiousinternational Journals dedicated to sports law.