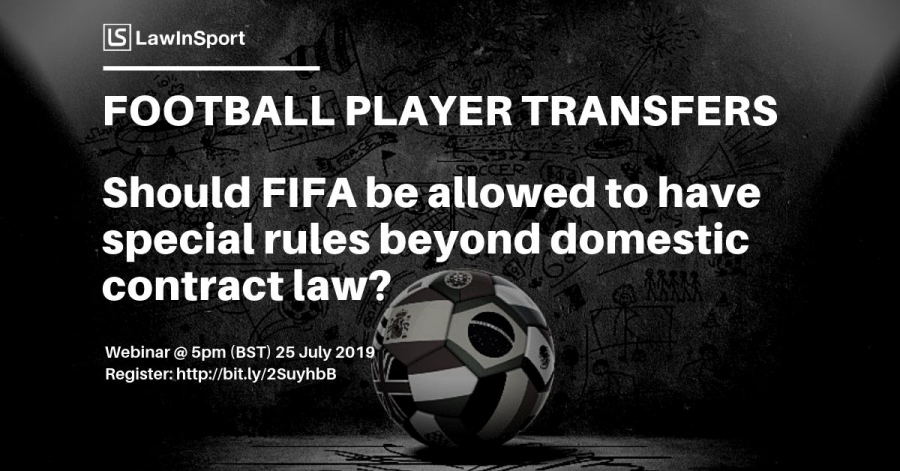 This interactive webinar will explore and debate whether FIFA, as the world governing body of football, should be allowed to impose special rules beyond domestic contract law?

To explore this issue our speakers will provide insights into why the current system is in place and how this works with their current domestic laws.

Professor Ross teaches and writes in the disparate areas of Sports Law and Comparative Constitutional Law. He clerked for Judge Ruth Bader Ginsburg of the U.S. Court of Appeals for the District of Columbia, served as minority counsel for the Committee on the Judiciary of the U.S. Senate, and worked as an attorney for the Federal Trade Commission and the U.S. Department of Justice. He has provided expert testimony and advice on sports antitrust issues to governmental entities and sports leagues and players associations around the world, and has consulted on sports league design for professional sports organizations in ice hockey, cricket, and motorcycle racing. Professor Ross has also served as a senior fellow of the American Antitrust Institute and as pro bono counsel to the AAI and consumer groups including the Consumer Federation of America on antitrust and sports litigation. He has co-authored casebooks in Sports Law and Comparative Constitutional Law has served as visiting professor at a number of Canadian, English and Australian universities. Since 2016, Ross has served as executive director of the University-wide Center for the Study of Sports in Society

Daniel has also provided guidance on UEFA Financial Fair Play Regulations and how they may affect the future financial planning of football clubs. He has also given briefings and spoken at workshops and conferences on the interplay between Competition Law, Football and Broadcasting.

Daniel also specialises in the technology & communiations and media & entertainment sectors. Daniel writes various articles for competition, media and sports law journals. Topics include the Premier League’s exclusive and collective television deal, Premier League rules and regulations and the broadcasting of listed sporting events. Daniel is the editor of a monthly legal football column called On the Ball at Football Aid.com which he co-authors with various lawyers for Field Fisher Waterhouse. On the Ball is a more informal take on legal issues in the football industry.

Daniel recently authored the book Done Deal which provides an insight into the business of football.

Ricardo Oliveras is the Head of Sports Law and Corporate partner at ECIJA. Attorney with extensive experience in business and sports law, began his career at KPMG Abogados in 1997. In the sports industry, Ricardo has been a corporate lawyer for organizers of international sporting events (America’s Cup Management -2004 to 2007 – Superleague Formula Motorsport Series -2008 to 2011 -) and has worked as a consultant on legal matters related to sports federations and national and international sports associations, right-holders/ promoters of sporting events, clubs, agencies/ agents and professional athletes in general companies and professionals operating in the field of sport, allowing him to have a broad knowledge on the operation of the sports industry in all its aspects. Among his recent collaborations, we highlight the advice to FIFA as legal counsel in Spain in the selection process of the host country to host the World Cup 2018.

In the commercial field, Ricardo advises numerous national and international companies in the field of commercial contracts and corporate law, as well as several technology start-ups, occupying the position of director or secretary in several of their clients. PDG (general management program) from IESE business school. Master in Business Law from the ISDE (Institute of Law and Economics). Lecturer on the "LLM in International Sport" ISDE. Member of the Spanish Association of Sports Law.

Recognized by the prestigious international ranking Best Lawyers amongst the best Sports law lawyers in the Spanish market.