The future of the 'legal autonomy' of sport: Session 1 – contractual autonomy 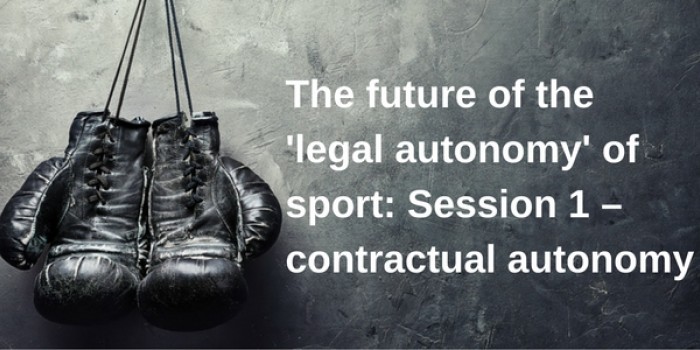 The theme of the conference is "the legal autonomy of sport", a concept long treasured by sports governing bodies, but which is perceived by some now to be a cloak for lack of democracy and fair process. Within this overall theme there are three strands reflecting the three conference sessions: contractual, political and legal autonomy.

The word autonomy derives from the Greek words auto and nomos, and means "those who make their own law". This raises obvious questions regarding legitimacy, more so in the light of 2015/16 being global sport’s annus horribilis, when sport was on the front pages for the wrong reasons, involving the continuing aftermath of corruption scandals relating to match-fixing and doping, a situation directly related it would seem to inadequate governance of several major international sports. At the same time disquiet has been voiced about whether the sports world’s system of private arbitration affords athletes fair recourse to their rights.

This first session (of three) looks at the contractual agreement that disputes between athletes, clubs and governing bodies be resolved by private arbitration with the Court of Arbitration for Sport as a "supreme court of sport". The panel discusses if reform is required.

Session 2 looks at the political autonomy of sport and is available here.

Session 3 looks at the legal autonomy of sport and is available here.