Partner and Head of Sport, Working at Kerman & Co

He has negotiated numerous lucrative sponsorship and supplier agreements on behalf of sporting events and governing bodies including the All England Tennis Club, PGA European Tour, Ryder Cup, London Marathon and RideLondon.

In addition, Zane has worked on a number of high profile Premier League football transfers and renegotiations. He has also successfully represented a well-known football agent in disciplinary proceedings brought by the FA. Zane has written a number of articles for the trade press and is the author of “Brand Games: How Not To Get Sued”, an article written for the Sports Journalist Association website about 2012 London Olympic legislation. He also wrote the controversial “Are Match Officials Fair Game?”, which was published in the British Association for Sport and Law Journal and “The Fifa Ethics Committee: An Oxymoron?“ for the professional body, aat ethics.

Zane has been credited in the Legal 500 as being ‘quick, and fantastic at drafting’ and is regularly requested by television broadcasters to provide his opinion on current sports law issues. 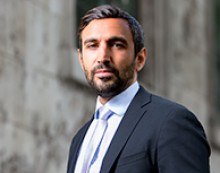