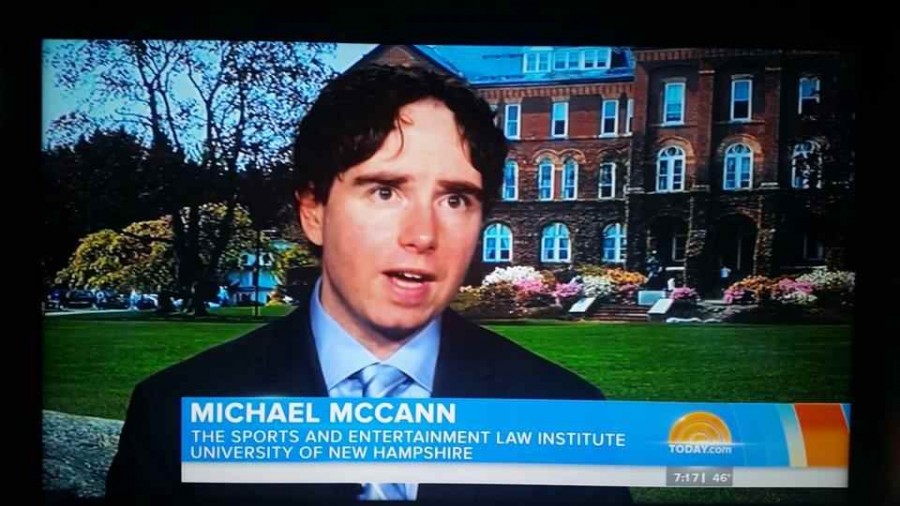 In this article LawInSport's Jake Cohen interviews  Michael McCann, the founding director of the Sports and Entertainment Law Institute (SELI) at the University of New Hampshire School of Law, a professor of law, an award-winning journalist, Editor-in-Chief for Sports Law Blog and one of the top sports lawyers in the United States.

In this interview McCann shares his personal journey of how be became a successful sports lawyer; explains how he continues to manage his hectic schedule and competing professional commitments; and, gives advice for aspiring sports lawyers as to how they can build a successful career as a sports lawyer.

Michael McCann is undoubtedly one of the highest profile US Sports Lawyers. He has written hundreds of columns and articles for Sports Illustrated and SI.com, including an incredible 50 legal columns during a 110-day stretch earlier this year. In addition, he has written over twenty law review articles, has presented at MIT Sloan Sports Analytics Conferences since 2009, and is a prolific voice on social media. (McCann's full bio can be found at the University of New Hampshire website and SI.com).

What inspired you to become a sports lawyer?

A good portion of my inspiration to become a sports lawyer traces back to being a frustrated fan of the Boston Celtics. I know that may sound strange, so let me explain; during the 1990s and into the early 2000s, the Celtics were generally bad. And in the NBA, like many leagues in the U.S, the worse a team performs, the higher the draft pick the team receives. So I was very familiar with the NBA draft, which was often the best night of the year for Celtics fans - our team wasn't going to the playoffs so draft night became our mini NBA finals.

Fast forward to the summer of 2001, when I was between my second and third year of school at the University of Virginia School of Law. I'm watching the NBA draft on TV and a prominent commentator, Dick Vitale, opined that it was a big mistake players were skipping college to go straight to the NBA. He was referring to high school to NBA players, like Kobe Bryant and Kevin Garnett, but also so-called failures like Taj McDavid and Korleone Young. I thought Vitale's position was inaccurate. My impression from closely studying the draft and the NBA was that players who skipped college generally did well in the NBA, and the failures were relatively few. I then Googled every player who attempted the jump from high school to the NBA and discovered they were the best age cohort in the NBA, both on the court in terms of points, rebounds and assists and off-the-court in terms of avoiding controversy. This seemed like important data because at the tie the NBA sought to raise the age limit so that players had to be at least 19 years old to enter the league. I realized the NBA disallowing high school players from entrance also posed legal consequences in terms of labor and antitrust law, and I wrote a paper on all of this during my third year of law school. I wrote it in a sports law class taught by Donald Dell, a legendary sports attorney who represented Arthur Ashe, Jimmy Connors and Ivan Lendl. Donald was an inspiring figure who encouraged me to pursue a career in sports law. I think I spent hundreds of hours writing 'Illegal Defense: The Irrational Economics of Banning High School Players from the NBA Draft', which included empirical analysis related to player performance and which was later published in a law review.

Sports law was also the area of law I found most interesting while I was a student at UVA Law from 1999 to 2002. While there, I was elected the Editor-in-Chief of the Virginia Sports and Entertainment Law Journal. It was a terrific experience to run a law journal devoted to sports and entertainment law. Through this position, I became familiar with the broad scope of sports law issues, including those sounding in antitrust law, labor law, and contract law.

Last, but not least, I studied from Professor Paul Weiler, who is the founder of sports law as a field in the United States, while I was an LL.M. candidate at Harvard Law School. Professor Weiler was a phenomenal teacher and mentor.

How did you first get started in sports law (i.e. what was your first "big break")?

My break into sports law occurred less two years after law school. In early 2004, I got in touch with Alan Milstein, who was representing Ohio State running back Maurice Clarett in his lawsuit against the NFL's age limit. Alan had read my paper on the NBA's age limit and was impressed and invited me to join Clarett's legal team. It was the experience of a lifetime. While we ultimately lost the case, it was an incredible opportunity.

Getting to interview Lance Armstrong at his home in Austin, Texas in 2013 to talk about his legal issues was extremely interesting. The Donald Sterling saga was also very interesting since it involved so many areas of law in a very unusual but compelling context.

In terms of fields of research, I most enjoy working with my students at the University of New Hampshire School of Law on their research projects. We have an extraordinary sports and entertainment law institute and certificate program at UNH Law, so there are plenty of amazing opportunities for me to work closely with students on their sports law research and help train them to become leading sports attorneys.

Given that you have an extremely busy schedule with your academic and media commitments, how do you successfully navigate the time management challenges while maintaining a consistently high quality output?

Thank you for those kind words. I honestly love what I do and I think anytime you love your job, you're well positioned to thrive in it.

I also have an amazing wife, Kara, who is very caring and incredibly understanding that my work schedule can be a little hectic at times.

What advice would you give to other sports law professionals who are looking to raise their academic, media, or legal profile?

My advice is, think about areas of sports law that are undeveloped but that you're passionate about. My most formative experience in law school was studying eligibility rules in the NBA draft and legal and economic issues surrounding it. It might strike a lot of people as odd that eligibility rules in a professional sports league draft would be so central in my education, but I was passionate about those rules and they hadn't yet been closely studied by many others.

What are some key legal developments in sport that are particularly interesting to you at the moment?

There are so many. One is Aaron Hernandez's upcoming trial for murder. I'll be in attendance for much of the trial and covering it for Sports Illustrated. Ed O'Bannon v. NCAA and other litigation against the NCAA and its amateurism rules are also of great interest to me because the traditional model of amateurism in college sports is about to change dramatically and will have unintended consequences. Reporting on these cases has also allowed me to meet some transformative figures in sports, including spending time with Ed O'Bannon and college athlete advocate Sonny Vaccaro as well as meeting NCAA officials.

I have also made some great friends in sports law, like Florida attorney Dan Wallach, who is one of the nation's leading experts on sports gaming law. He and I have collaborated on sports gambling law analysis. Other good friends I've made through sports law include Robert Raiola, who understands sports and tax issues better than anyone I know and who I've worked with on salary analysis of NBA and NFL players; Warren Zola, a true expert on college sports; and Alan Milstein, who took a chance on me years ago in the Clarett case and who's engaged in pioneering work as a sports litigator.