United Against Manipulation Of Competitions: Ioc Welcomes A String Of New Measures At The International Forum For Sports Integrity 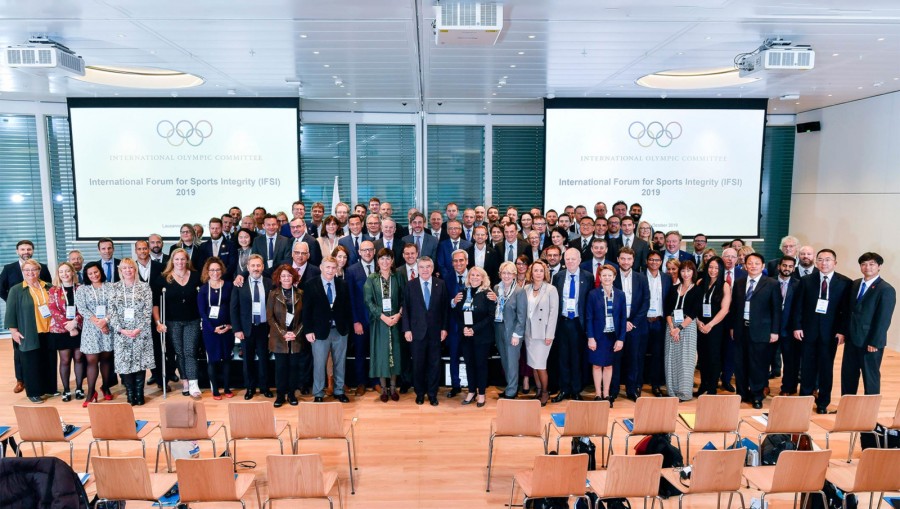 The third edition of the International Forum for Sports Integrity (IFSI) today brought together key leaders from sports and International Organisations. More than 100 stakeholders representing the Olympic Movement, Intergovernmental Agencies such as the Council Of Europe, The United Nations office on drugs and crime (UNODC), Interpol* and Europol**, as well as sports betting operators, national regulating authorities, academics and other experts met at the International Olympic Committee (IOC)’s new headquarters, Olympic house. all of the participants reaffirmed their determination to protect clean athletes and fair competition.

During the opening speech, IOC President Thomas Bach said: “This gathering today reflects the very nature of the IFSI, which is cooperation and partnership. We are a community which shares a common goal to protect competitions from manipulation and from related corruption.”

At the Forum, a new publication, “IOC-UNODC Reporting Mechanisms in Sport: A Practical Guide for Development and Implementation”, was launched. The guide provides information on good practice for sports organisations with regard to receiving and handling reports of wrongdoing, including competition manipulation, harassment, doping and corruption.

In his speech, President Bach praised the close cooperation with the many stakeholders. “In the spirit of this cooperation, we have taken many measures together since the launch of the IFSI in 2015,” he said. “The most obvious example is the Council of Europe Convention on the manipulation of sports competitions, which came into effect last month and is already being implemented in a large number of countries. This is an example of the IFSI in action.”

Ronan O’Laoire, the Global Coordinator for UNODC’s Global Programme for Safeguarding Sport from Corruption and Crime, pointed to the importance of developing effective reporting mechanisms in sport, “It is crucial for government agencies and sports organisations to identify and apprehend those responsible for wrongdoing in sport, including competition manipulation. Having effective reporting mechanisms in place to facilitate this is essential, and we believe that the Guide on Reporting Mechanisms in Sport, developed through our partnership with the IOC, sets out a highly effective basis to do just that,” he said.

President Bach also welcomed the launch of a Sports Investigators Network. “With this network of 200 trained investigators from International and National Federations, National Olympic Committees and sports disciplinary bodies, we can really go to the heart of the problem, which is having access to information as soon as possible and, in some cases, even before the problem occurs. Having this investigators’ network in place will allow us to address issues from the roots,” Bach outlined.

During the Forum, the IOC and EUROPOL also signed a Memorandum of Understanding (MoU) that will establish a mutual cooperation framework between the two organisations. This will facilitate the exchange of expertise, the dissemination of information and the engagement in joint endeavours related to the field of manipulation of competitions and related organised crime.

On the signing of the MoU, Europol’s Deputy Executive Director, Wil van Gemert, said: “Corruption in sports is a global criminal phenomenon perpetrated by organised crime groups operating cross-border and often involved in other crimes. Working closely together in coalition with key partners, like the IOC, is crucial in the fight against corruption in sports. Combating sports corruption means not only defending the integrity of sports, but also protecting the public from criminals who cause significant damage to the safety, security and wellbeing of the EU citizens.”

The Forum later heard first-hand testimonials from four-time Olympian hammer thrower Jennifer Dahlgren. Dahlgren acts as an ambassador for the “Believe in Sport” campaign, led by the Olympic Movement Unit on the Prevention of the Manipulation of Competitions (OM Unit PMC).

Launched last year, the “Believe in Sport” campaign aims to raise awareness about the threat of competition manipulation among athletes, coaches and officials. It will again be activated at the Youth Olympic Games Lausanne 2020 in January and, in collaboration with the various Olympic International Federations (IFs), in the run-up to and during the Olympic Games Tokyo 2020.

In addition, all accreditation-holders at next year’s Olympic Games will have to respect a Code of Conduct and the “Tokyo 2020 Betting Rules”. The Olympic competitions will be monitored closely in real time. Should any potential breaches be detected by the OM Unit PMC’s Integrity Betting Intelligence System (IBIS), disciplinary processes are in place to follow up swiftly. Furthermore, the IOC’s Integrity Hotline enables everyone to report suspicious activities, including ones related to competition manipulation and any other infringements of the IOC Code of Ethics.

Also actively involved in reaching out to her fellow athletes at the recent Pan-American Games, Dahlgren said: “There are a lot of athletes who are vulnerable because they simply lack information about competition manipulation, an issue that can put them at serious risk. I accepted to be one of the 17 Believe in Sport Ambassadors as I realised athletes need to be more aware of this topic. We are engaging them directly during international and regional competitions, and these interactions prove to be beneficial for all of us.”

Panel discussions and expert presentations at today’s Forum covered important topics such as: information exchange and investigative procedures; how to ensure impartial and effective reporting mechanisms; the activities of the OM Unit PMC created as a result of the last IFSI; the implications of the entry into force of the Council of Europe Convention on the Manipulation of Sports Competitions; collaboration between betting entities and sports organisations; and the coordination between sport and criminal investigators.

Please find here all the conclusions of the third IFSI.

The International Olympic Committee is a not-for-profit independent international organisation made up of volunteers, which is committed to building a better world through sport. It redistributes more than 90 per cent of its income to the wider sporting movement, which means that every day the equivalent of 3.4 million US dollars goes to help athletes and sports organisations at all levels around the world.