#Justice4Navid - How must sport respond to the execution of the Iranian wrestler? 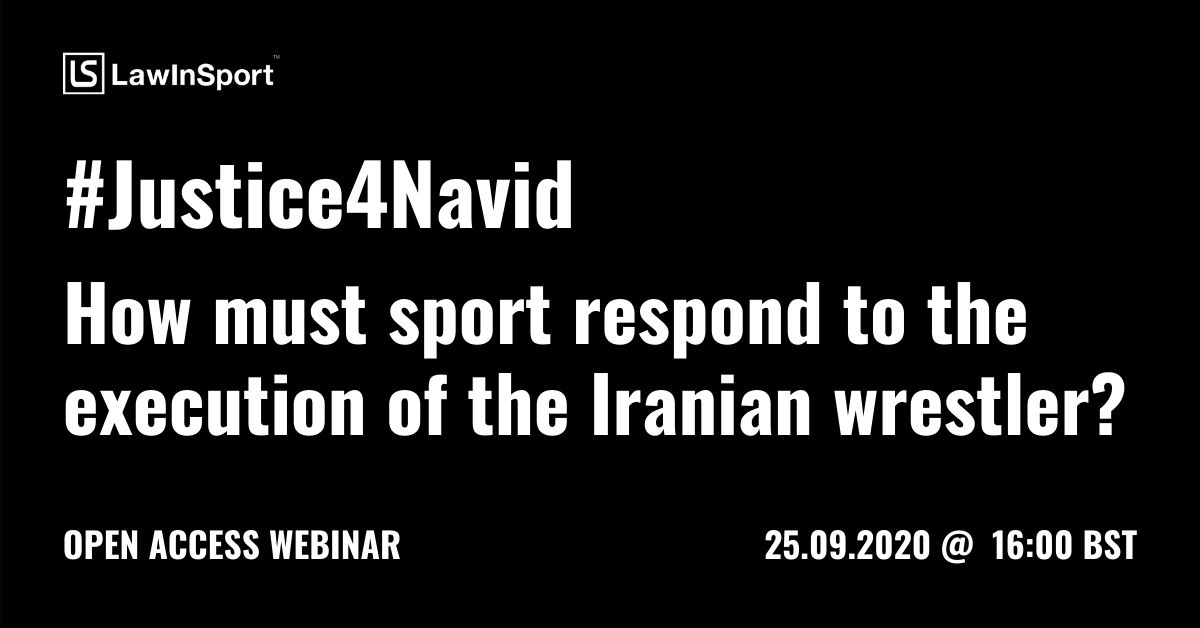 We are hosting this important open access webinar following the horrific execution of Iranian wrestler, Navid Afkari. This tragic event pulls into sharp focus the role of sport in promoting peace and protecting athletes around the world. Our speakers will discuss:

Sally Roberts is a former elite wrestler and Combat Veteran and the Founder and CEO of Wrestle Like A Girl® whose mission is to empower girls and women using the sport of wrestling to become leaders in life. Sally is living proof that girls can do anything and that through sport they can realise their full potential. She is the youngest of three children and was the first person in her family to graduate high school, graduate college, and earn an advanced degree.

Sally was a resident at the Colorado Springs Olympic Training Center for eight years during which time she was a Three-Time National Champion, a World Cup Champion, a Two-Time World Bronze Medalist, and an Olympic Alternate. She served six years in the Army as a Special Operations soldier where she volunteered for deployment to Afghanistan. Sally was also a member of the Army’s prestigious World Class Athlete Program and represented both the U.S. Army and Team USA in elite athletic competitions. As a passionate veteran and military advocate, Sally was recently featured as the cover story in the Veterans of Foreign Wars (VFW) magazine and appeared on the VFW National Campaign video.

Sally was the recipient of the 2016 Women in Sport Award on behalf of the United World Wrestling Sports Governing Body and the International Olympic Committee and was extremely honored to be named USA Wrestling ‘Woman of the Year’ for 2018. Sally was also selected as one of 25 elite women representing seven nations and 23 sports who were chosen to participate in the EY Women Athletes Business Network, a mentoring program designed to prepare and propel high-potential women leaders to greater heights of achievement through mentorship and leadership training, provided by the International Women's Forum and its Leadership Foundation.

Rob is the Director General for Global Athlete a non-for-profit organisation that champions a “bottom up” approach whereby the athletes determine and dictate what needs to change and the best way of achieving that change. Think of it as a balancing of the scales, and putting athletes on a fair footing with administrators because, together, so much more can be achieved for the greater good of sport.

Schwab has more than 25 years leadership experience in the governance, business, legal, player relations and human rights aspects of elite sport at the global, regional and national levels. Appointed Executive Director of World Players in July 2015, he has united the world’s leading player associations who collectively represent 85,000 athletes to champion the dignity of the player and the humanity of sport.

Prior to joining World Players, Schwab played an instrumental role with FIFPRO, the world footballers association, in protecting the rights of professional footballers, especially within Asia and Oceania, serving in various capacities between 2007 and 2015 including as a board member, Vice President and Chairman of FIFPro Division Asia/Oceania.

He is a co-founder of the Australian Athletes’ Alliance (AAA) (2007), which represents eight player unions and over 3,500 athletes in sports such as Australian football (AFL), basketball, rugby union, rugby league, cricket, netball and football. He also co-founded Professional Footballers Australia (PFA) in 1993, serving as its long-serving Chief Executive and General Counsel while advancing its progression and the reform of Australian football. In 2016, he was appointed as PFA Chair for a four-year term.

Schwab holds a Bachelor of Laws degree and a Master of Business Administration.