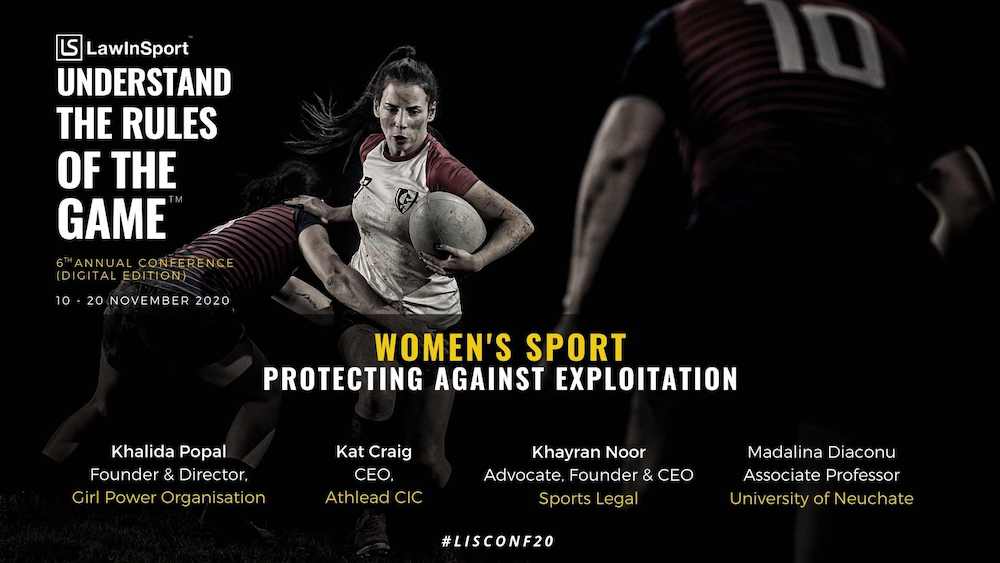 Our expert panel will be discussing how to protect against exploitation in women's sport drawing on the experience and lessons from the fight for justice following the abuse done by officials of the Afghanistan Football Federation against female athletes in Afghanistan.

The panel is part of the LawInSport's 6th Annual Conference - Understand The Rules of The GameTM which we are making open access.

***Once you register you will be send a link to join the live session. Please note you will need to use the a ZOOM account linked to the email addressed used to register for the event.***

Khalida Popal overcame significant opposition before she founded the Afghan women’s football team back in 2007. She then went on to captain the team. and later she became the first woman to be employed by the Afghanistan Football Federation, first as Finance Officer and then as Director the Women’s Football Committee.

Despite going into exile un 2011, the pioneer remained connected to her country and is involved in "so many activities supporting and helping projects which helps women in terms of healthy lifestyle and sports."

Khalida Popal launched Girl Power Organisation in 2014, an association that aims to use the power of sport to facilitate refugees, migrants and immigrants. Sport is being used as a tool to integrate women in their local communities and to empower women and give them a new strength and hope in life.

In 2016 Khalida Popal also continued to run the Afghan Women’s National Team where she played a leading role in bringing focus on the issue of sexual harassment. This with a focus on the abuse done by officials of the Afghanistan Football Federation against female athletes in Afghanistan.

Khalida Popal travels the world where she speaks on behalf of the women who cannot defend themselves. She has given speeches at FIFA, UEFA, United Nations, UNICEF, Peace & Sport conference.

Khalids Popal’s work was acknowledged by Theirworld. Their World was handing out the global education award and the Girl Power organisation was given the Challenge Award in 2017. The aim of the campaign and award was to challenge the embedded prejudices which prevents women and girls from achieving equality on a global scale.

Kat is an award-winning human rights lawyer and the CEO of Athlead, a not-for-profit consultancy specialising in sport and human rights. Her clients include UN agencies, athlete unions, national governments, major sport-for-development funders, and former Premier League footballers and Premiership rugby players. In the last four years, Kat has worked extensively with elite and professional athletes across five continents who experienced sexual and racial abuse and harassment. She regularly advises on accountability and grievance mechanisms in the sporting and non-sporting context.

Kat holds a postgraduate Executive Certificate in Sports Philanthropy from George Washington University, where she now sits as an Advisory Board member. She has a first-class Postgraduate degree in Law and while working in private practice was listed in both the Legal 500 and Chambers & Partners. In her spare time, Kat helps run Camden & Islington United, a supporter-owned football club based in North London.

A barrister and an academic, Dr. Madalina Diaconu is specialized in European and International Economic Law, with an emphasis on Sports Law, Gambling Law and Entertainment Law. She has 20 years' experience in the legal practice and has worked for major international and Swiss organizations active in these areas.

As a barrister, she mainly practices commercial and contract law (including labor law), criminal law, immigration law and human rights.

A specialist in Sports Integrity, Dr. Diaconu is also a member of the UEFA Control, Ethics and Disciplinary Body (UEFA CEDB).

She is also an external consultant for the Swiss Institute of Comparative Law (ISDC) in Lausanne and for several Swiss and International organizations active in the fields of Sports, Games and Entertainment.

Founder and CEO of Sports Legal. An upcoming Sports Organisation that advocates for the empowerment of Women, Youth and people living with disabilities (PLWDs) in Kenya, regionally and internationally through Sports.
General Growth & Development, Governance, Policy and Management of Sports in the Region. Khayran a mentee of the LawInSport Academy Mentoring Scheme Class of 2019-2020.