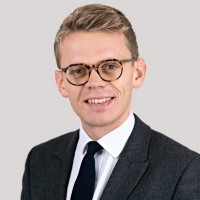 Samuel is a barrister at 12 King's Bench Walk.  He joined chambers in October 2020 after successful completion of his pupillage during which time he gained significant experience in industrial disease, catastrophic injury, and clinical negligence. Samuel is regularly instructed in trials and interim applications, alongside his busy paperwork practice.  Samuel specialises in sports litigation, with a focus on sports injury. He is particularly interested in head injuries in sport, having spoken and written widely on the subject.

Samuel studied philosophy at the University of Durham, during which time he spent a year studying at Paris Nanterre University. He completed the GDL at BPP University, funded by a Lord Brougham Scholarship and a Hardwicke Scholarship from Lincoln’s Inn. Samuel completed the BPTC at the University of Law during which he was the recipient of a Lord Denning Scholarship and an Accommodation Award from Lincoln’s Inn. Whilst at Bar School, Samuel mooted in the Supreme Court as a finalist in the Clyde & Co Insurance Law Moot, and was secretary of the Lincoln’s Inn Debating Society. Samuel also holds an LLM from University College London, his studies for which were also funded by a scholarship.

During his studies, Samuel was a caseworker at anti-trafficking charity Kalayaan focusing on modern slavery and enforcing the rights of overseas domestic workers. He also regularly appeared in the social security tribunal as a representative for the Free Representation Unit. He further worked as a legal researcher for a former Lord Justice of Appeal, and he was also the editor of the Private Law section of a major online law journal.