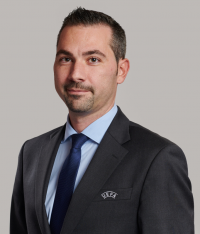 Managing Director of Integrity and Regulatory at UEFA.

Half Italian, half Greek, Angelo was born in Verona and lived in different countries before settling in Switzerland in 2010.  Angelo studied law at the University of Bologna and chose civil law as the subject of his thesis (Civil Responsibility in Sport Activity). He went on to do a postgraduate degree at the University of Milano-Bicocca, with a thesis in constitutional law (Violence in Stadia: Problems of Constitutional Law).

After obtaining the FIFA Master in July 2010 (final project on the international transfer of minors), he worked as a UEFA lawyer in FIFA’s players’ status department in Zurich, dealing with disputes between clubs (related to training compensation, solidarity contribution and transfer agreements) at European level as well as employment-related disputes between players and clubs.
In February 2013, Angelo moved back to Nyon, where he first worked as a legal counsel within the UEFA sports legal services unit and then was promoted to Head of National Associations Governance within the National Associations division in February 2017 where he invested a lot of time in the preparatory work for what are now UEFA’s good governance principles for national associations. Since September 2018, Angelo his has taken over as Managing Director of Integrity and Regulatory. In his role, he is responsible to oversee the division’s activities delivered by the Disciplinary Services, Statutory and Regulatory, NAs Governance, Anti Match-Fixing and Anti-Doping & medical units.
Author's Content