Deloitte's Spotlight - Football on the verge of break-even

The break-even requirement, the cornerstone of UEFA’s Financial Fair Play Regulations, will first apply to clubs in UEFA competitions for the 2013/14 season. As a product of the football family’s consensus for change, it primarily aims to help European clubs achieve amore sustainable balance between their costs and revenues.

This article is taken from the Deloitte Annual Review of Football Finance, published by the dedicated Sports Business Group.  Should you wish to learn more about the group then please visit the website www.deloitte.co.uk/arff

For the 2013/14 season the break-even requirement will be assessed based on the results of a club’s financial reporting periods ending in 2012 and 2013. Thereafter, it will be the aggregate of three financial reporting periods. If a club has an aggregate break-even surplus, or a deficit which is within the acceptable deviation, then the break-even requirement is fulfilled. Initially the acceptable deviation is €5m, or up to €45m if the excess over €5m is covered by unconditional contributions from owners/related parties. This upper threshold will reduce to €30m from 2015/16, and a lower amount from 2018/19.

The results of a simulation exercise set out in UEFA’s latest Benchmarking Report, using clubs’ results for the three reporting periods ending in 2009-11 (i.e. before the implementation of the break-even requirement), illustrate that 46 (21%) of the clubs in UEFA competitions for the 2012/13 season had an aggregate break-even deficit greater than €5m. The geography of break-even deficits is widespread, as these 46 clubs were from 22 countries. Of these 46 clubs, 16 clubs had an aggregate deficit within the €45m upper threshold which was also covered by contributions, leaving 30 clubs from across Europe that appeared to be in breach if the Regulations had already been applicable. So it looks like a significant minority of clubs around Europe will need to take some corrective action to operate within the break-even requirement in future; through a renewed focus on revenue generation and adaptation of the cost-side of their business, for instance through their player transfer activity and wage costs negotiations. 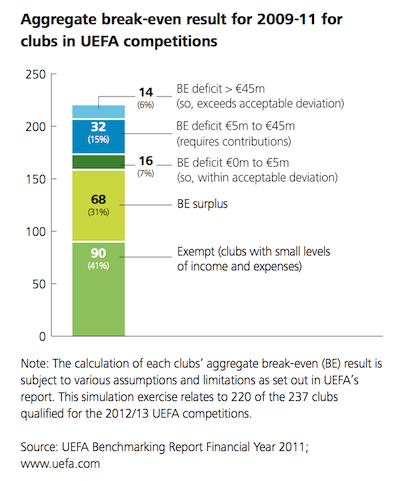 Amidst the tumult of top level European football, some utterances of concern, and a few circling legal eagles, UEFA has laid strong foundations for first time implementation. The clubs’ first submissions of their financial results, adjustments, and break-even result will be made using UEFA’s IT solution in July 2013. It is then for the Club Financial Control Body to further scrutinise clubs and appropriately address those in breach.

Like other regulatory systems in sport and wider society, it cannot be entirely immune to the risk of evasive behaviour by some clubs and their advisers. For the Financial Fair Play objectives to be achieved, effective policing will be required and the football family needs to work together, including an intolerance of financial cheats.

Cost control has long been recognised as one of the biggest challenges facing clubs across Europe. The break-even requirement responds to this challenge and has also nudged some national leagues to develop and adopt new financial governance measures. The evolution from relying, often in vain, on restraint to applying cost constraints should help the clubs improve their financial results and also encourage owner funding to be directed more towards spending on facilities and activities for the longer term benefit of football. Time will tell.

The Sports Business Group at Deloitte is providing assistance to UEFA for the development and implementation of the Financial Fair Play Regulations.