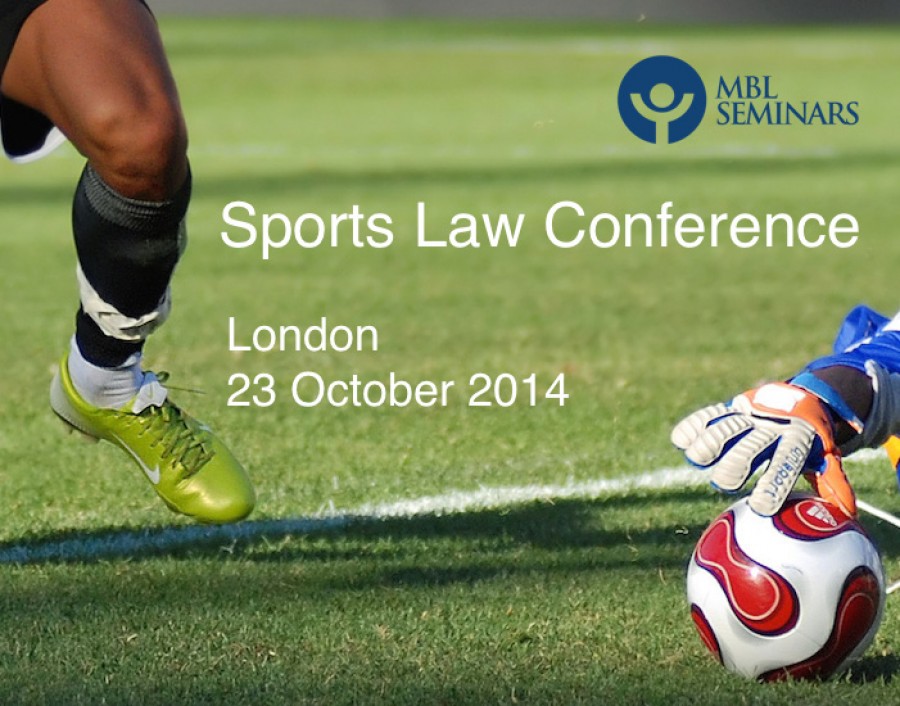 LawInSport attended this year’s MBL Sports Law Conference. The theme of the conference was to provide an “update” on sports law issues, so the topics covered was indeed quite varied and comprehensive.

The conference opened with Alex Kelham, Head of Lewis Silkin's Sports Group, covering Ambush Marketing. Alex reminded attendees of the importance of careful negotiation with the sponsors; there will be different levels of association, therefore the contract needs to reflect that. Additionally, in every event there will be different sponsors associated with the participants, which could lead to conflicts and that should to be controlled. She referred to the existing legal framework, covering intellectual property rights (IP rights), statute and specific event legislation. These areas were covered in detailed, with special focus in the practical aspects of protection against ambush marketing with a number of examples. Alex suggested that education of the official sponsors and participants is paramount in protecting rights holders and sponsors and that sometimes a warning letter can be more effective than recourse to the courts.

Alastair Purssell, an associate at Squire Patton Boggs, followed Alex Kelham, who presented on the topic of Image Rights. Alastair emphasised avenues of legitimate exploitation of image rights. As such, the different capacities in which a player’s images can be exploited at personal, club, national team levels would need to be reflected in the contract with player and sponsors. While it is perfectly acceptable to demand from the player that he or she doesn’t enter into endorsements conflicting with the club or national team, the contract should address what happens in the event of termination of contract by either party, what are the requirements on the part of the player and so forth. Alastair also covered the registration of image rights in Guernsey and tax structures which are likely to be accepted by HRMC.

After a brief break, a change of scene to cover Equality in Sport covering very topical issues like ‘Rooney rule’, homophobia, ‘plastic Brits’, board representation and private members’ clubs. David Hunt, partner at Farrer & Co, provided a very interesting presentation giving a quick summary of the current legislation (Equality Act 2010); David went on to discuss ‘Rooney rule’ (which provided that at least one ethnic minority should be interviewed for head coaching posts in the NFL) and its applicability in the UK. In his opinion, ‘Rooney rule’ would amount to positive discrimination and such contrary to the law. Nonetheless, some of the surrounding measures also adopted (education, targeted training and others) would be positive action and therefore accepted. Discussing homophobia, he provided the applicable framework in the event of discrimination and/or harassment. David also shed some legal light on the ‘plastic Brits’ debate (effectively a more stringent approach could be adopted to be selected for the national team) and Private Members’ Club (especially in golf) which are in the process of changing their membership rules.

Nick Fitzpatrick, Global Co-chair Media Sport and Entertainment team at DLA Piper UK received the baton to another change of area talking about issues in Sports Broadcasting. Nick explained that the current challenge is the sustained diversification and a shift towards platform neutrality, where the successful license holder will sub-licence contents to other platforms (e.g. Sky and Netflix). In the area of EU Digital Single Market, Nick explained that the Commission intends to develop copyright within the EU to keep up to date with the digital revolution. Finally, he discussed the issue of communications to the public and the different jurisprudential approach by the Court of Justice of the European Union and in England and Wales.

Following a break for lunch, Andrew Nixon, partner at Sheridans, discussed Third Party Ownership (TPO) in Football. Andrew provided the legal framework and went on to distinguish TPO (legal in some football jurisdictions) from Third Party Influence (which has always been illegal). Outlining the sources of the problem - the need for funding, lack of appropriate structures to develop players - and the regulatory responses by FIFA, UEFA and different football associations, after the Tevez affair. Nonetheless, there are still significant arguments in favour of TPO, which Andrew explained in detail contrasting them with the reasons against. Interestingly, he also proposed a number of alternatives to the stringent outright prohibition.

Keeping within the economic aspects of football, Daniel Geey, senior associate at Field Fisher Waterhouse, presented on the topic of Financial Fair Play (FFP). Daniel highlighted their positive effects and the significant adjustments since their introduction. Amongst them, a drive towards increasing the revenue and these are outgrowing wages, breaking the trend prior to FFP. The effect of FFP seems to be that the possibility of heavy sanctions is leading to self-control on the part of the clubs. Daniel unpicked UEFA’s FFP data and also analysed the measures adopted by the Premier League and Football League reflecting (sometimes going further) FFP. Daniel criticised the opacity of UEFA in dealing with the settlements, although the existence of that mechanism is a positive feature which allows clubs to come up with a readjustment plan. Finally, in the horizon is Striani’s legal challenge to FFP, which so far is not being successful, but which by no means is terminated.

After the final coffee break the conference took another change of topics, this time in the hands of Philip Williams, Barrister at No 5 Chambers, dealing with Challenging the Actions of Sport Governing Bodies. Philip focused his attention on the Cronin case (Christopher Cronin v Alphavet Limited, unreported), to showcase the development of a challenge to a SGB. In an anecdote loaded talk, the public was reminded of the importance of designing a challenging strategy from the outset.

The running of the event was seamless and the topics were attractive and topical, and in cases (like equality in sport) even a welcome change.